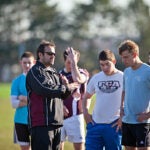 The aged game of rugby

Early last April, I pulled a pristine crimson folder from a tattered envelope to find the hard copy of my Harvard acceptance.  Still euphoric from the news of my admission over email several days earlier, I flipped through the folder until I came upon a flyer about the April Visiting Program.

The page explained that the April Visiting Program, now called Visitas, was a time when newly admitted students visited the College to experience Harvard’s academic, social, and extracurricular offerings firsthand.  Within hours, I had signed up for a host through Harvard’s website and had booked a flight to Boston. Though I did not realize it at the time, the people and activities I would stumble upon over that weekend would set me on the trajectory to my current Harvard life.

Pre-frosh weekend was a dream. In addition to attending panels, dances, and dining hall meals, I got to glimpse the aspects of college life unique to Harvard. I managed to hear the “Ten Thousand Men of Harvard” song 10,000 times as the band made an appearance at every event I did. I attended the a cappella jam on the sunny steps of Widener Library and watched a stellar student-written play in the Adams Pool Theatre. All in all, though, the other students I met proved to be Harvard’s best advertisements. Hourlong meals in Annenberg Hall exposed me to bright-eyed people enamored with the world around them. This was a group I wanted to remain connected with.

Though gilded in my memory, the weekend certainly was not perfect.  I made some amateur mistakes like forgetting to pack long-sleeved clothing (whoops) and wandering around Harvard Square in search of a mystical Earth Day event at the MAC Quad that I never actually found. Despite these blunders, I now look back on the weekend and realize that those three short days determined more about my current Harvard lifestyle than any other sessions I have had at the College since. Chance encounters that occurred over April Visiting Weekend set in motion much of my Harvard reality.

Almost every component of my academic, extracurricular, and social life this year can be directly traced to a conversation or event that happened that weekend. To begin with, I met most of my close friends through the Freshman Arts Program (FAP) during freshman pre-orientation. A varsity athlete in high school, I never would have even considered applying to participate in an arts program at Harvard were it not for the rave reviews the program received from my visiting weekend host Alex. First semester of my freshman year, I took the lessons I learned through participating in FAP and stepped outside my comfort zone for a second time by joining the Pan African Dance and Music Ensemble, a group whose mesmerizing performance in the pre-frosh weekend talent show inspired me to want to learn more about African culture. African dance is an unheard of pastime back home, but it quickly became one of my favorite activities at Harvard.

I also attended English Professor Louis Menand’s stellar “Art and Thought of the Cold War” class over pre-frosh weekend. The lecture was so captivating that I looked up the readings after class last year and subsequently decided to take the class this semester.  My positive experiences looking at mid-20th century art through the lens of the Cold War have pushed me to consider History and Literature as a viable concentration. Were it not for pre-frosh weekend, it is possible that none of these components of my current life would have come to fruition.

Realizing how vital the weekend was to helping me imagine what my Harvard world could encompass, I chose to get involved with the Undergraduate Admissions Council this year and help coordinate the weekend for next year’s freshman class. Only months after attending the weekend as a student, I am now revising the budgets and the schedule for this year’s program.  I have gained an appreciation for the many logistics that go into making the first impressions of Harvard so warm. Someone needs to order those 29 gallons of ice cream served at the Sunday Sundaes event; someone needs to find speakers for panels and recruit groups to perform in the arts showcases.

A good first impression requires effort, and with Harvard’s many tourists and prominent public image, that effort needs to be sustained all year long, but never more than during admit weekend: the time when the future of Harvard first visits the University. It’s times like these when first impressions set the trajectories for life.