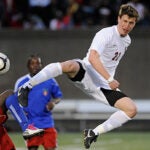 More than a game

From a Harvard Medical School (HMS) team that switched to reusable containers for sharp objects, thereby eliminating 11,000 boxes of waste, to a Harvard Business School (HBS) move to make its executive education programs sustainable, teams and individuals from around the University were recognized for their efforts through the Green Carpet Awards on Monday (April 11).

Presented by the Office for Sustainability (OFS), the Green Carpet Awards honored 55 individual winners and seven teams, showcasing the creativity and passion that Harvard’s sustainability leaders bring to their efforts. The program, modeled after the Academy Awards, offered some lighthearted takes on sustainability, with an actual green carpet for winners to walk, a tongue-in-cheek music video about turning off lights, and student singers the Harvard Opportunes offering “Greening up Harvard’s Campus,” a takeoff on the Gladys Knight and the Pips tune “Midnight Train to Georgia,” pledging that they’re “working to find — ways to reduce waaaaste and crime.”

The event also featured several video messages to winners and supporters in the audience, with President Drew Faust assuring the audience that Harvard is on its way to achieving its sustainability goals and that its campus is a living laboratory for improvement programs.

“We have come a long way, but we have a long way to go. Our success will depend on each one of you,” Faust said.

Later in the program, HBS Professor Robert Kaplan, an executive committee member of Harvard’s greenhouse gas reduction program, said that the University has been making progress toward its reduction goals, cutting greenhouse gas emissions by 10 percent from 2006 levels by the end of 2010. When the emissions of 3 million square feet of newly opened buildings are eliminated from calculations, the reduction is much larger, 20 percent below 2006 levels, Kaplan said. The University’s goal is to cut overall emissions — including those from new construction — from 2006 levels by 30 percent by 2016.

The Office for Sustainability was itself singled out for praise by several recipients for its role encouraging and supporting a variety of individual and group initiatives.

Winners and finalists showcased the breadth of the sustainability effort at Harvard. In addition to the HBS green executive education program and the HMS sharps waste reduction program, team winners included the first School-wide Green Office program, at Harvard Divinity School; a green building project at the Harvard School of Public Health at 90 Smith St. in Boston; a solar heat and recovered steam heat system in the Canaday undergraduate dormitory; and a Faculty of Arts and Sciences (FAS) building project to reduce greenhouse gas emissions at the LISE building. A comprehensive list of winners can be found on the OFS website.

Both Clark and Phillips said any achievements they have made in the area of sustainability were due to the inspiration and passion provided by those with whom they work. Clark praised Harvard’s overall efforts, but said there are two areas where more has to be done: transportation and campus biodiversity.

OFS Director Heather Henriksen left the audience with a challenge, saying the stories of winners highlighted at the ceremony should inspire all to continue to innovate and to bring good ideas back to their Schools and departments.

“We are counting on your creativity and leadership to help save the planet and help solve the global environmental challenges,” Henriksen said.