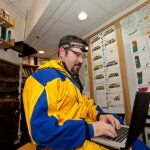 Change in the air at HSPH

Samuel Hutchison Beer, the distinguished Harvard political scientist, died in his sleep at the age of 97 in Washington, D.C., on April 7, 2009.

His special field was British politics, in which he was for years the world’s leading expert.  But he also studied the American political system, and, for contrast to academic life, made himself active in American politics as a life-long Democrat and Chairman of Americans for Democratic Action (1959-1962).  He was a man brave beyond the calling of a professor: in June 1944 he fought in the U.S. Army in Normandy, earning a Bronze Star; and his peacetime hobbies included rock climbing and skydiving.

After his wartime duty as Captain in artillery, Beer spent a year in the U.S. Military Government in Germany (1945).  While at Oxford he had traveled to Germany and taken note of the rising threat of Nazism; after the war he was able to pursue his interest in the question of how so civilized a country, governed as a democracy, could lose so much and come so low.  When he returned to Harvard to teach in 1946, he gave a course on that topic and became the leader of an approach to comparative government that made sense of facts through the ideas of political, social, and economic theory.  He began teaching in Harvard’s new General Education program “Social Sciences 2,” a course on Western thought and institutions that was as much history as political science, and as much political theory as comparative government. He continued this famous course for over 30 years to the benefit and admiration of thousands of Harvard undergraduates. And for all those years he met regularly with the graduate student teaching fellows in the course, who discovered that they were arguing with a professor who had formed his opinions but also, unconcerned with display or triumph, helped them to form theirs.

Sam Beer’s first book was titled The City of Reason (1949), a study in the tradition of Oxford idealism that sees the reason inherent in human things rather than hovering above them and criticizing irrationalities.  Avoiding the vague complacency of such a view, he turned to facts and entered the domain of social science, where he took care to consider the fact of human intent and to maintain the role of ideas.  He launched the thorough study of British politics that made him celebrated in Britain as the man who knew their politics better than they did.  In 1965 he published the book that secured his reputation, British Politics in the Collectivist Age, combining an analysis of postwar British socialism with the hard facts of political parties and pressure groups.  Beer was for years the foremost scholar of British politics, the master of its very British intricacies and a detective who found their apparently accidental coherence.  Though an admirer of Britain, he never believed that British politics could be a model for American politics, in which he had an absorbing interest that was not merely academic.  In 1982 he published Britain Against Itself: The Political Contradictions of Collectivism, a sequel analyzing the stagnation of collectivism in the interplay of interests it had created.

Always a partisan outside but never inside the classroom, Beer took a leading role in opposing the student rebellion of the late Sixties at Harvard, criticizing the politicization of universities.  In 1998 he also criticized the politicization of impeachment, testifying to the House of Representatives in the case of President Clinton.  His study of American politics was crowned by the publication of his major work To Make a Nation: The Rediscovery of American Federalism in 1993, when he was 82.  In it he stressed the original national purpose behind the idea of states’ rights, often abused to diminish the American nation.

At Harvard Beer served as the Eaton Professor of the Science of Government from 1971 and was chair of the Department of Government from 1954 to 1958.  He received an honorary doctorate from Harvard in 1997.  Retiring at Harvard in 1982, and with vitality intact, he moved to Boston College to become the first Thomas P. O’Neill, Jr., Professor of American Politics, in part to honor his friend, the former Speaker of the House of Representatives.  He was also elected President of the American Political Science Association in 1977, and was made a Fellow of the British Academy in 2000.

The honors Beer received and even the books he wrote were emblems of the life he led, which was the life of a teacher.  His teaching was memorable above all for the warmth of the virtue he conveyed in it.  Neither cynic nor idealist, the everyday world’s recalcitrance to our most compelling ideals never dampened his good cheer.

His hearty affections were in plain sight: for his wife, Jane, his true companion; for his beloved late wife, Roberta (who died in 1987); for his children, Kitty, Frances, and Billy (who died in 1991), his step-children, Alison and Camilla, and his grandchildren, step-grandchildren, and great-grandchild; for his hometown Bucyrus; for Harvard, his intellectual home for over 70 years, and his many students there; for Franklin D. Roosevelt and the Democratic Party; and for his country, which he served wisely in peace and bravely in war.