Planting a research center in the arboretum 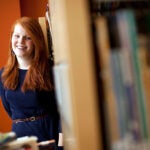 At college, but almost home

As blossoms unfurl at the Arnold Arboretum, Harvard’s plant scientists are welcoming the opening of more than just flowers this spring, as the Arboretum’s new Weld Hill Research Building fills with staff, scientists, and sophisticated equipment.

The 44,000-square-foot building received final approvals from Boston in December, and since then has been awash in moving boxes and crates. One of the first occupants was the arboretum’s new director, William “Ned” Friedman, the Arnold Professor of Organismic and Evolutionary Biology.

Friedman, an esteemed botanist who came to Harvard from the University of Colorado, took over the arboretum’s leadership in January, his start dovetailing nicely with that of the building that will be his new home.

During a walk through the building shortly after his arrival, Friedman enthusiastically showed the new labs and equipment, and spoke of the community he hopes will grow among scientists who work in the open, shared laboratory spaces.

“By getting the walls out of here, there’s a social component. The goal is to have people mixing,” Friedman said. “If you’re in your own office and the door is closed, you can’t have a conversation with someone else.”

The building allows the arboretum’s researchers, who moved from offices at the Cambridge campus, to share space with those in charge of managing the collections, who had been based at the arboretum.  Researchers and graduate students began moving to their new offices in January, even as the new laboratory equipment was arriving.

“The most joyful thing in the world is having a new microscope,” Friedman said. “My postdoc is a microscopist; he’s just about passing out with all the new equipment.”

The new building has enough extra room, Friedman said, that there is space for visiting scholars from other institutions and for undergraduates pursuing plant science research.

In order to bridge the physical distance between the arboretum, which is in Boston’s Jamaica Plain and Roslindale neighborhoods, and the Cambridge campus, a shuttle van will be used to ferry students or entire classes for lessons that draw on the arboretum’s resources.

An advantage of the new building is its proximity to the arboretum’s living collection, Friedman said. While the arboretum doubles as a city park and an important part of Boston’s string of parks called the Emerald Necklace, it also is one of the world’s pre-eminent collections of woody plants. As a living collection, the arboretum also includes other forms of life, such as fungi and insects, that can be studied by researchers at Weld Hill.

“Out there are not just lots of plants, but incredible numbers of insect, fungal, and microbial species. We have 275 acres of biodiversity,” Friedman said.

The building also has a dozen greenhouses where some specimens can be grown and others collected from the field can be raised, including for Friedman’s own research into the origin of flowering plants, collected in New Caledonia.

Doctoral student Becky Povilus and postdoctoral fellow Julien Bachelier moved to Harvard from the University of Colorado to continue their work with Friedman and were among the first to settle into the new building. Bachelier said it was “everything we heard, but better,” while Povilus said having the arboretum nearby was a plus, as it is a place to both collect samples and to walk around and get ideas for new avenues of research.

For the next few months, Friedman said, the staff will focus on getting researchers situated and their work under way. A major emphasis, Friedman said, is to further develop relationships with the community through activities such as open houses and the new director’s lecture series.