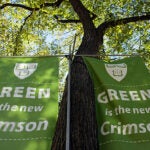 The Harvard College chapter of Phi Beta Kappa (PBK), Alpha Iota of Massachusetts, will induct 24 juniors at a formal ceremony at Leverett House on April 25.

Phi Beta Kappa’s national mission is to foster and recognize excellence in the liberal arts and sciences, and election to Alpha Iota of Massachusetts signifies that an undergraduate has demonstrated excellence, reach, originality, and rigor in his or her course of study. The honor society recognizes students whose course work shows not only high achievement, but also breadth of interest, depth of understanding, and intellectual honesty. Twenty-four juniors are elected each spring, 48 seniors each fall, and a further number sufficient to bring the total membership to no more than 10 percent of the graduating class in the final election shortly before Commencement.