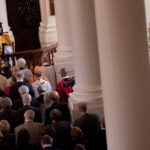 Between schoolwork and classes, a typical day in the life of a Harvard student is undoubtedly busy — but throw in playing on two sports teams and you’ve got a schedule rivaling that of Harvard President Drew Faust.

Freshmen Morgan Powell and Mariah Pewarski are among a small group of Harvard students balancing life and school with two sports — in their case, lacrosse and field hockey.

Though they admit it’s difficult to have a social life, and that practices and games consume most of their days, they wouldn’t have it any other way.

“I did a couple of sports in high school, so I learned how to balance schoolwork and the practices, and not having weekends, really,” said Powell, a native of Saratoga Springs, N.Y.

Same with Pewarski. She played field hockey and lacrosse throughout middle and high school in Garden City, N.Y., and said that she’s used to balancing the demands of school with the rigors and time commitment of sports.

“I was prepared for the sacrifices that come with playing sports on a high level and getting my schoolwork done,” she said.

Both women devoted spring break to practices. They attend morning classes to accommodate practices, too, which typically run from 3:30 p.m. to around 7 — every day. And they’re mindful of getting enough rest, with bedtimes before midnight, depending on workload.

Because field hockey is a fall sport, and lacrosse is in spring, Powell and Pewarski are always in season. But they consider themselves lucky. After all, they’re never bored, and they even make time for volunteer work.

Powell, who is considering fashioning a nutrition concentration, fell in love with the subject after doing community service with underprivileged children. “I love working with children and getting them off on the right foot in life with nutrition. I saw how much they looked up to me and how much of an impact I’ve had on their life.”

The sometimes baker and self-confessed “band geek” (she plays trumpet!) will head home this summer in hopes of a nutrition and exercise physiology internship at a local college, and she’ll also take up her old waitressing job at Lillian’s, a popular restaurant for Saratoga Springs’ horse-racing set.

“I volunteer at the Harvard Square Homeless Shelter and I am also participating in Relay For Life,” said Pewarski, who’s undecided about her concentration. “I recently have been leaning toward economics, but I haven’t abandoned the idea of going into science or math.”

And unlike other freshmen who arrive at Harvard, settle in, and make friends on their own time, Powell and Pewarski arrived to a built-in support group and a pack of best friends for life — their teammates.

“You find most of your friends in the athletic world,” said Powell. “It’s definitely difficult having a social life outside of sports, but for the most part it’s a good balance. Sports keep me grounded.”

Said Pewarski: “A large portion of my schedule that I can’t fail to mention is the time I spend with other people I have met at Harvard not through sports. I have four roommates from all over the country, who all have many diverse interests. I spend a lot of time with them, whether it is on study breaks with my entryway, meals, BerryLine runs, or just time spent in our room.”

The intensity and discipline of athletics in no way diminishes the fun these young women are having.

“What I love about sports is the time I get to spend with my teammates and the experiences I receive from traveling with a team,” said Pewarski. A memorable experience from her field hockey season was visiting California for a few games and meeting a Harvard field hockey alumna who now works at Facebook, and who gave the team a tour of its headquarters.

“Sports helped me to become a driven person in life,” said Powell. “A lot of what you do in sports translates into real life. You learn a lot of things you wouldn’t learn in a book.”