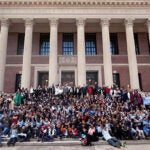 A window into college

When Claire Reardon was growing up in Rhode Island, she regularly reviewed the family’s shopping lists to make sure her father avoided buying shampoo brands that had been tested on animals. Now she is a Northwest Building lab manager, working to ensure that one of Harvard’s most energy-intensive activities is as green as possible.

Before enrolling at Harvard Business School (HBS), Carol Choy was a member of her company’s green team, encouraging colleagues to tend the environment even as they tended to business. Now Choy is a student green-living representative at HBS, similarly raising environmental awareness among fellow students by encouraging recycling and using resources wisely.

On the eve of Earth Day (April 22), all across Harvard, in ways big and small, people increasingly are pitching in to help the University reach its lofty conservation goals that will soften its environmental impact and could make it a national model on the uncharted path to sustainability.

While effective policies are critical in helping Harvard to meet its exacting conservation targets, another key to progress is behavior change — that holy grail of myriad activists who tout goals ranging from healthy eating to regular exercise to the environmental credo of “reduce, reuse, and recycle.”

Though proper exercise and eating remain elusive goals, when it comes to the environment, the evidence at Harvard is mounting that people generally understand that change is needed and that they must shift their daily work habits and alter their assumptions about what it means to be part of the University community.

Harvard as a model for community change

Turning sustainability into something that people don’t just do but that they expect to do could propel the University into becoming a working example of change far beyond its boundaries. When students graduate and leave Cambridge, those who have internalized the message that sustainability is the norm will spread that belief.

“The most lasting effect we have is on the students we send into the world, so they make decisions in their company or nonprofit that have the biggest impact,” Henriksen said.

Harvard’s eventual impact on sustainability could prove broad. With 26 million square feet, the University is the size of a small city, with buildings ranging from classrooms to residences to businesses to athletic facilities. Other institutions are likely to adopt programs that succeed here.

“What Harvard does have is unbelievable faculty, bright students, and smart, engaged staff members. What we’re trying to do is make our campus a living model about how you drop energy use in an economically viable way,” Henriksen said. “Behavior change is not just one thing you do over here on the side. It has to be top down, bottom up.”

The greenhouse gas reduction goal was set in 2008 after President Drew Faust accepted the recommendations of the Harvard Greenhouse Gas Task Force. Faust acknowledged then that it was an ambitious goal that would require sweeping participation to succeed. “Every person at Harvard — student, faculty, staff — can contribute to the effort to avert the dire outcomes that scientists are predicting,” Faust said that year. “We are all teachers, and we are all learners in this endeavor. We must do it together.”

Wise use of resources is pivotal to sustainability. Schools and departments have begun a series of programs to encourage people to change their everyday behavior. Recycling bins are now in every office, and their use is rising, driving University recycling rates from 5 percent 20 years ago to 55 percent today.

Recycling and reuse programs do more than encourage people to dispose of paper in big blue bins. For Valentine’s Day, Leverett House undergraduate green rep Gracie Brown helped to gather unwanted cosmetics and donated them to a shelter for battered women. Brown, a senior, said she works four to six hours a week on her official sustainability duties. Each rep works on a program like the cosmetics drive, as well as an ongoing campaign.

Elsewhere, University composting programs ensure that food waste and compostable paper are returned to the soil. A Harvard School of Public Health (HSPH) program has reduced 67 tons of biodegradable waste to usable compost and returned it to the earth at a Saugus farm. Sustainability programs are flowering not only in Cambridge, but also at the Harvard Medical School and HSPH campuses in Boston. HSPH’s Take the Stairs Campaign hopes to trim usage of the School’s elevators while improving health. A School-wide contest will see which team of five can log the most stair-climbing before April 22.

Many approaches that add up to energy savings

Sustainability programs, organizations, contests, and other activities rely on the Harvard community to be effective. Increasingly, people are stepping in to help. Green-minded supporters have pawed through mounds of trash during waste audits to understand better what people throw away and how they might toss less. Student groups have weatherized the Phillips Brooks House and the freshman dean’s office. People have put stickers on lab equipment reminding users to turn off the power when they have finished working. HBS even garners a bit of clean power in the gym, through special stationary bikes hooked up to the electric grid.

OFS programs to grow green offices, dorms, and labs are buttressed by teams of staffers and green-living student reps. Henriksen said the OFS role is to offer support, encouragement, and even celebration — such as the April 11 Green Carpet Awards, which acknowledged the contributions of individuals and groups in making Harvard more sustainable.

Henriksen takes a broad view of behavior change, one that counts as critical the actions not just of workers, students, and faculty, but also of managers who seek ways to save, and institutional leaders who signal Harvard’s commitment and point in a direction that others can follow. Without those people on board and pushing to make sustainability a priority, the effort would fail, Henriksen said.

That’s because many conservation programs couple an institutional aspect with behavior change. At HBS, for example, thermostats are set a few degrees cooler in the winter and warmer in the summer to save energy and money. Schoolwide guidelines on when to ready a space for daily occupancy have changed, from turning on heating or cooling two hours before people arrive, to doing so just 30 minutes beforehand. Because the School allows individuals to override the guidelines, the program’s success depends on the cooperation of those using the buildings.

Andy O’Brien, HBS’s chief of operations, said he has gotten few complaints from the occupants since the program began. People bring in sweaters during winter and dress more lightly in summer.

Several years ago, HBS bought new “chillers” for central cooling. The machines are large and efficient, and can be switched on or off as needed. The flexibility provided by the equipment and the adaptive HBS community has allowed the School to ride out demand peaks at warmer temperatures — 73 degrees rather than 70, for example, saving money and energy, O’Brien said.

“In the past, it was the Wild West,” O’Brien said. “If someone wanted to turn the temperature up, they did. It’s about having agreement across the University about what’s acceptable. You bring a sweater in the winter. Those small things make quite a difference when spread across the 1.3 million square feet that I have to manage.”

A Harvard Law School (HLS) program shows another way to save energy. Over winter break, custodians go into every space at the School and check for equipment left on, thermostats not turned back, and other missed opportunities for savings, according to HLS sustainability coordinator Kate Cosgrove. When the custodians find equipment that was left on, they leave a note reminding the owners how to save energy.

“We have seen really great results there,” Cosgrove said.

Several people involved with Harvard’s efforts to go green said it’s important to create a culture where sustainability is simply expected. Henriksen and OFS assistant director Jaclyn Olsen said they have added sustainability presentations to freshman orientation sessions so students hear the messages from the moment they set foot on campus.

Cosgrove and Jenny Lee, a third-year law student and green living rep who has helped to expand the composting program into dormitories, said an important aspect of the HLS program is creating the expectation of sustainable living. This emphasis on creating social norms is carried out by publicizing successes, such as the energy walk-through program, and by making everyday actions such as recycling and composting expected.

“People seem even more willing to engage because every facet of their behavior reinforces the other,” Lee said.

While much has been done, much remains to be done. Harvard’s self-imposed deadline of a 30 percent cut in greenhouse gases is just a few years away. Advocates of recycling, heady that they’ve zoomed past the 50 percent mark, are eyeing a goal of zero waste by 2020.

While such goals may seem daunting, those in the thick of the changes say that even though it might seem that all the easy improvements already have been made, they find more each year.

“Five years ago, I would have told you we’d gotten all the low-hanging fruit and can’t get any more,” O’Brien said. “But [each] year, we still have more.”