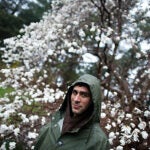 In trash, an unlikely muse

Professor Muhsin S. Mahdi, James Richard Jewett Professor of Arabic Emeritus, at Harvard University, died on July 9, 2007, in Brookline, Massachusetts, after a long series of illnesses, at the age of 81. Universally acclaimed as the leading specialist in medieval Arabic and Islamic philosophy, Mahdi was born in 1926 in the city of Karbala, Iraq, where his mother gave birth to him leaning against the wall of the sanctuary of Imam al-Husayn. After schooling in Karbala and Najaf, he finished high school in Baghdad. An outstanding student, he was awarded a government scholarship to study business administration at the American University of Beirut, where he earned both a B.B.A. and a B.A. in philosophy (1947). He taught for a year at the University of Baghdad (1947-1948) before coming to the United States on another Iraqi government scholarship to begin graduate studies in economics at the University of Chicago. Here he was soon able to pursue his true vocation: he studied with Nabia Abbott at the Oriental Institute and began his profound exploration of political philosophy under the guidance of Leo Strauss (1948-1954). His dissertation, on Ibn Khaldūn, was immediately recognized as groundbreaking.

After a year as a post-doctoral fellow in Paris and two more years of teaching at the University of Baghdad, he returned to the University of Chicago, where he taught in the Department of Near Eastern Languages and Civilizations from 1957-1969. At Harvard University from 1969 until his retirement in 1996, he was the James Richard Jewett Professor of Arabic and served as director of the Center for Middle Eastern Studies and later also as chair of the Department of Near Eastern Languages and Civilizations. Mahdi conducted postdoctoral research at the University of Freiburg, Germany. He was a Rockefeller Foundation research fellow and a Fulbright research scholar in Morocco. He held visiting professorships at the University of Freiburg, the American University in Cairo, the Central Institute of Islamic Research in Pakistan, the University of California, Los Angeles, and the University of Bordeaux. He was a founding member and president of the International Society for the History of Arabic Sciences and Philosophy and a founding member and board member of the Middle East Studies Association. He served on the editorial boards of four important journals in the field: Arabic Sciences and Philosophy: A Historical Journal; the Journal of Near Eastern Studies; Hamdard Islamicus; and Interpretation: A Journal of Political Philosophy. He also served as president of the American Research Center in Egypt and was honored by being the first corresponding member of the Cairo Academy of Arabic Language.

Upon retirement, he divided his time between Cambridge, Massachusetts, the French countryside, and Paris, where he lectured at the Institut du Monde Arabe and frequented the cafés and bookshops that were the meeting places of artists and intellectuals from all over the Muslim world, many of them former students. Shortly before his death, he was awarded an honorary doctorate by the American University in Cairo—sadly, in absentia. Professor Mahdi had an incomparable command of the medieval Arabic language in its many varieties (depending on subject matter, geographical and/or religious context, and author’s training). Having steeped himself in the well-proven methods of critical editions of manuscripts developed in Western scholarship, he ardently desired to establish the same rigorous standards in the field of Arabic and Islamic philosophy. He devoted much of his career to searching for manuscripts wherever his travels took him. A rigorous but stimulating teacher, he emphasized fine-tuned analysis and interpretation of the Arabic philosophical texts. He was an enormously influential teacher, and one who inspired great loyalty from his students. A sense of Mahdi’s teaching can be gauged by the impressive 1992 festschrift, The Political Aspects of Islamic Philosophy, edited by one of his closest students, Charles Butterworth. He is especially known for the recovery, edition, translation, and analysis of the writings of the philosopher Abū Nasr al-Fārābī (870-950 CE). His last book, Alfarabi and the Foundation of Islamic Political Philosophy (2001), is a collection of luminous and illuminating essays. With Ralph Lerner of Chicago and the late Ernest Fortin of Boston College, he co-edited Medieval Political Philosophy, a sourcebook that includes selections in translation from Hebrew, Latin, and Arabic. However, there is a second pillar of Muhsin Mahdi’s fame: his critical edition of the earliest extant manuscript of The Thousand and One Nights—a core of tales that would be transformed and expanded, beginning with Galland and going on to Lane and Burton and beyond, into the quintessential Orientalist creation of the eighteenth and nineteenth centuries (Alf Layla wa Layla, Leiden, 1984; third volume, in English, 1994). The edition was the outcome of a Herculean labor, since the manuscripts of the Thousand and One Nights are numerous, though mostly not very old, and the text, being on the border of oral and written literature, is in constant flux, which meant that Mahdi had to develop a special method to achieve what would deserve to be called a critical text.

As Steve Lenzner has written, “In his life and work, Muhsin Mahdi transcended the idea of East and West. He was, as a friend put it after his death, a liberal in the old-fashioned and elevated sense, deeply versed in, and shaped by, the world’s great books. In no way did this show itself more clearly than in Mahdi’s devotion to his teacher Leo Strauss. Mahdi’s last book, Alfarabi and the Foundation of Islamic Political Philosophy (2001)—the fruit of a lifetime of study and unsurpassed on the subject—bears the dedication: ‘For L.S.—If we had to repay the debt of gratitude incurred by his kindness to us, not even the whole of time would suffice.’” Some colleagues considered the Nights a diversion from his work in philosophy, but those with deeper understanding have always known that creative literature often serves as a refuge for political philosophy in troubled times.  Charismatic and charming, with a mischievous smile and a cordial laugh, Muhsin Mahdi was also an intensely private person who maintained the stance of a true philosopher throughout decades marked by conflict between and among peoples of the three religions of the Book. It is evident, however, that the destruction of his native land by his adopted country was finally too much for him. His health, already seriously affected by the Gulf War in 1992, was dealt another blow in September 2001. March 2003 was a fatal wound, although it took him four more years of mental and physical anguish and suffering to die from it.

Professor Mahdi is survived by his wife, Sarah Roche-Mahdi; two daughters, Fatima and Nadia, from a previous marriage to Cynthia Risner; and two stepdaughters, Rachel and Rebekah Gerstein. He is also survived by his first wife, Louise Carus Mahdi.  His granddaughter Lina Morouj Colla, daughter of Nadia and her husband, Elliott Colla, was born October 31, 2007.