Long a Harvardian, now an American 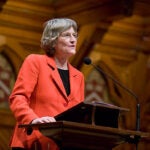 Marina Betancur knows the Harvard Kennedy School (HKS) well. Five days a week, she’s there before dawn to prepare the café for a long day of operation.

But on Tuesday (April 5), the 47-year-old Colombia native got to see a different side of the School she loves, one usually reserved for visiting diplomats and world leaders. Surrounded by family and friends, as well as by teachers and tutors from the Harvard Bridge Program, Betancur and 15 other Harvard employees were feted by President Drew Faust at a dinner in the Taubman building.

Their accomplishment? Becoming Harvard’s newest American citizens. For Betancur, who was formally sworn in as a citizen last September, the annual dinner was a victory lap after a long and arduous trek to becoming an American.

“Sometimes I forget I am [a] citizen,” she said with a humble laugh.

When Betancur, then a young newcomer to the United States, gave birth to a baby girl 21 years ago, she made a promise that her daughter would go to college.

“My plan was to stay here for two years,” she said. “But I knew, for my daughter, the future was here.”

At the time, she was newly married and working as a seamstress in a Boston factory. She spoke little English and worked long, physically demanding hours. Her life began to turn around, she said, when she found a new job at HKS in 2000.

“I love the people at my job, and they love me,” Betancur said.

Every weekday morning, Betancur wakes up at 4 a.m. to ride the T from East Boston to her job at the HKS café, where she preps and runs the grill. In the afternoon, when her shift ends, she heads to her second job at a Boston cleaning company.

In between, Betancur makes time for twice-weekly classes at the Bridge. Founded by Harvard human resources employee Carol Kolenik, the Bridge Program was conceived in 1999 to offer English language classes to hourly and union employees. Kolenik is director of the program, which has expanded to include courses on General Education Development (GED) and Adult Diploma Program (ADP) test preparation, college preparation, computers, and citizenship preparation.

Through her 18-hour days, Betancur wears a radiant smile that threatens to overtake her tiny frame. “I like to work,” she said with a laugh. “My goal was to come here to make money for my family and me. But when I was here, I was so happy.”

Now in her 10th year taking English and computer literacy classes, Betancur has been a Bridge student for twice as long as she attended school in Colombia, where she started working right out of elementary school. She relishes the opportunity to learn English, even though it’s been the hardest task of her time in the United States, she said.

Betancur’s journey to citizenship has been fraught with difficulty. Her immigration lawyer failed to send in her legal paperwork, she said. That lapse, she later discovered, landed her on a deportation list. With support from the Bridge Program, she connected with a new lawyer who made the case that she had been unfairly targeted, and she was allowed to stay in the country.

She began preparing to take the citizenship test with the help of the Bridge Program’s citizenship tutoring program, which pairs hopeful citizens with Harvard undergraduate tutors from the Institute of Politics.

In preparing employees for the test — which assesses English comprehension and fluency, and quizzes test takers on civics and history — Harvard is validating some of the hardest-working members of its community, said Ana Roche, co-coordinator of the program. “For many people, becoming a citizen is part of their American dream coming true, a culmination of their hard work and perseverance. [America] has given them a lot, and they’ve given the United States a lot, too.”

Betancur’s daughter is now a student at Mt. Ida College in Newton, and Betancur can remain in America to watch her graduate without worrying about deportation. She pauses, her eyes as wide as her smile, when she considers Bridge’s effect on her life.