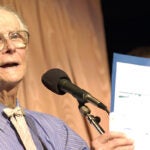 What would a Zagat-style review of Harvard’s new provost, Alan M. Garber ’76, look like?

“Scary smart.” “Supremely institutional.” “Impeccable judgment.” A “first-rate economist” and “dedicated physician” who “loves Harvard — would throw his heart and soul into the job.”

Those phrases were just a handful that President Drew Faust plucked from the many praises she received for Garber during her search for a replacement for Steven E. Hyman, who announced in December his decision to step down. She shared them with a crowd of well-wishers gathered at Loeb House on Friday afternoon (April 15) for a reception to welcome Garber and his family to Harvard.

“It’s a very close working relationship,” Faust said of the provost’s partnership with the president in crafting the University’s strategic academic vision. “[Hyman’s] values, his commitments, his deep institutional dedication to Harvard have just been marvelous, and I know that Alan will have that same set of values.”

Faust announced earlier Friday that Garber, the Henry J. Kaiser Jr. Professor, and professor of medicine and economics, at Stanford University, would begin as provost on Sept. 1.

Most recently, Garber served as chair of the Harvard Medical School and Harvard School of Dental Medicine visiting committee, where he was exposed to many of the issues that the University faces across its Schools and other offshoots.

“There are certainly weaknesses,” Garber told the crowd at Loeb House. “But my overwhelming reaction has been, not only is [Harvard] a spectacular place … but it has improved dramatically since my years as an undergraduate.” Various arms of the University now work together much better than they did, he said, largely thanks to Hyman’s work over the last decade.

Hyman, who has served as provost for nearly a decade, lauded Garber’s appointment, noting his commitment “both to excellence and to bringing the University together to strengthen its intellectual goals, despite its bureaucratic divisions.” He said that Garber’s experience navigating the often-disparate worlds of medicine, economics, and public policy research would give him a critical perspective in his new role defining the University’s strategic academic vision.

“I think it’s very important to have somebody who has crossed disciplinary boundaries and schools and departments, because that remains an area where Harvard will have to get stronger and stronger,” Hyman said.

Calling his admission to Harvard “the second most-important acceptance I ever got” (after Yahanda’s agreeing to marry him), Garber fondly recalled the College’s effect on his life. He started out as a pre-med biochemistry major, but his tutor in Dunster House convinced him to try economics and arranged for him to be a faculty research assistant.

The encouragement he received as an undergraduate, he said, started him down the unusually broad path he would pursue as a physician and an economist. His economics research focuses on ways to improve health care quality and delivery, methods to assess the cost effectiveness and comparative value of health interventions, and ways to best structure incentives for cost-effective care. He has served as founding director for both the Center for Health Policy and the Center for Primary Care and Outcomes Research, both at Stanford. Garber currently serves on the steering committee for Stanford’s Freeman Spogli Institute for International Studies.

“Harvard was truly transformational for me,” he said. “I’m looking forward to assisting Drew in her desires to prepare Harvard for the 21st century.”

Among the issues he hopes to focus on, he said, are guiding Harvard’s development in Allston, continuing the reorganization of the libraries, advancing the role of the humanities, and promoting interdisciplinary initiatives, “which Harvard does much better than anybody on the outside believes, [although] there’s still room for improvement.”

“I didn’t decide when I was a teenager that my goal was to become a provost,” he said to laughter. “Drew is the world’s most effective recruiter.”

He hesitated to leave Stanford, he said, but thought he couldn’t pass up an opportunity to “help a great institution … to move forward and reach its goals.” He’ll also get to reconnect with old friends from his days as an undergraduate and a medical resident; many of them turned out for the celebratory reception.

“He’s really nice, really smart, and incredibly energetic,” said Tom Schwarz, a professor of neurology and neurobiology at Children’s Hospital Boston, and an old colleague. His broad background, Schwarz added, “would allow him to work well with various institutions.”