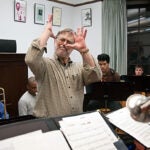 Growing up, historian Maya Jasanoff traveled extensively over summers with her family from their Ithaca, N.Y., home to Europe, Asia, and the Middle East. “My love of history grew up in tandem with travel, which gave me the chance to see history up close in diverse and fascinating forms,” said Jasanoff, the John L. Loeb Associate Professor of the Social Sciences in Harvard’s Department of History and an expert on the history of modern Britain and the British Empire.

“The fact that my mother comes from India, and my father’s family from Eastern Europe, has given me a more personal reason to study the history of the British Empire, and the history of cross-cultural relations more generally,” recalled Jasanoff, whose book “Liberty’s Exiles: American Loyalists in the Revolutionary World” was recently published.

“Here in America we learn about the revolution from the winners’ side,” she said, “and little attention gets paid to the loyalists.”

According to Jasanoff’s research, some 60,000 American loyalists fled the newly formed United States, taking with them 15,000 slaves to Canada, Jamaica, the Bahamas, Sierra Leone, and other destinations.

After the American Revolution, “refugees left behind friends and relatives, careers and land, houses and native streets — the entire milieu in which they had built their lives,” writes Jasanoff.

Jasanoff had no idea before beginning her research “that so many loyalists left the United States — creating quite possibly the largest civilian exodus (as a percentage of population) in U.S. history, and the widest-ranging refugee crisis ever faced by the British Empire.” More importantly, she also notes, the British offered freedom to slaves who agreed to fight, resulting in the emancipation of 20,000 slaves — the largest American emancipation until the Civil War.

“I was very moved by the personal stories that I found: letters, memoirs, and petitions from ordinary people caught on the wrong side of history, whose lives ended up taking shape in ways and places none of them could ever have anticipated,” said Jasanoff.

“I was especially struck to see how people maintained relationships with friends and family members across great distances, and to discover how many of these refugees moved more than once, leaving paper trails around the Atlantic. I also had the opportunity to visit Freetown, Sierra Leone, which was founded by black loyalists in 1791, and where the archives remain intact despite the country’s recent horrific civil war. It was easily the most thought-provoking research trip I’ve ever taken.”

Jasanoff is currently at work on a new project about the historical circumstances underpinning the works of Joseph Conrad. “I strongly believe in bringing out the ‘story’ within history, and revel in writing historical narrative,” she said.

Telling those lesser-known histories seems to be Jasanoff’s forte. “The American Revolution remains a touchstone for our ideas about what the United States stands for and who we are,” she said.

“That makes it all the more important, in my view, for Americans to develop a thorough understanding of all sides of this event — including those of the dissenters, misfits, and losers.”