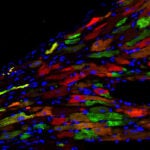 Helping the heart help itself

Scientists at Harvard University have harnessed the prowess of fast-replicating bacterial viruses, also known as phages, to accelerate the evolution of biomolecules in the laboratory. The work, reported in the journal Nature, could ultimately allow the tailoring of custom pharmaceuticals and research tools from lab-grown proteins, nucleic acids, and other such compounds.

“Most modern drugs are based on small organic molecules, but biological macromolecules may be better suited as pharmaceuticals in some cases,” said Liu, a professor of chemistry and chemical biology at Harvard and an investigator with the Howard Hughes Medical Institute. “Our work provides a new solution to one of the key challenges in the use of macromolecules as research tools or human therapeutics: how to rapidly generate proteins or nucleic acids with desired properties.”

Liu and Harvard co-authors Kevin M. Esvelt and Jacob C. Carlson achieved up to 60 rounds of protein evolution every 24 hours by linking laboratory evolution to the life cycle of a virus that infects bacteria. This phage’s life cycle of just 10 minutes is among the fastest known. Because this generation time is so brief, the phage makes a perfect vehicle for accelerated protein evolution. The PACE system uses E. coli host cells to produce the resulting proteins, to serve as factories for phage production, and to perform the key selection step that allows phage-carrying genes encoding desired molecules to flourish.

In three protein evolution experiments, PACE was able to generate an enzyme with a new target activity within a week, achieving up to 200 rounds of protein evolution during that time. Conventional laboratory evolution methods, Liu said, would require years to complete this many rounds of evolution.

Evolution of biomolecules is also a natural process, of course. But during biological evolution, generation times tend to be long, and researchers have no control over the outcomes. Laboratory evolution (also called directed evolution) has been practiced for decades to generate biomolecules with tailor-made properties, but it typically proceeds at a rate of about one round of evolution every few days and requires frequent sample manipulation by scientists or technicians during that time.

In addition to not requiring human intervention during the evolutionary process, Liu’s new approach uses readily available components and is designed to be resistant to “cheater” molecules that bypass the desired selection process. Researchers can control PACE’s “selection stringency” as well as its mutation rate.

“Laboratory evolution has generated many biomolecules with desired properties, but a single round of mutation, gene expression, screening or selection, and replication typically requires days or longer with frequent human intervention,” Liu, Esvelt, and Carlson wrote in Nature. “Since evolutionary success is dependent on the total number of rounds performed, a means of performing laboratory evolution continuously and rapidly could dramatically enhance its effectiveness.”