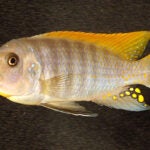 The table slab was cold and hard beneath 6-year-old Irene Hizme as doctors and nurses took measurements and blood samples. She didn’t know what was happening to her, and by the time it was all over, she wouldn’t care. She was found lying nearly comatose on the ground by a woman who brought her home to begin her recovery.

Though it’s routine for children to be examined by physicians, that was hardly the case here. Her doctor was Josef Mengele, the infamous Nazi who conducted cruel experiments on inmates at the Auschwitz concentration camp during World War II.

Hizme, who survived both her imprisonment and Mengele’s experiments, told her story to a rapt audience at Harvard Medical School’s Joseph Martin Conference Center in the New Research Building on April 14. Hizme was participating in a program to kick off the opening of an exhibit at Harvard Medical School’s Countway Library of Medicine, “Deadly Medicine: Creating the Master Race.”

The exhibit, created by the U.S. Holocaust Memorial Museum in collaboration with a long list of institutional sponsors, addresses physicians’ roles in the evolution of what became the Holocaust through the early decades of the 1900s to the horror of its full execution during World War II.

The exhibit presents an eye-opening look at some of the lesser-known programs — many of which involved physicians — that established the Nazi philosophy of racial improvement and then implemented it through the 1930s. These programs began in 1933 with forced sterilization of the blind, deaf, alcoholics, physically deformed, and other groups judged inferior. In 1939, the murders began of thousands of children born with deformities, moving on to the killings of hundreds of thousands of adults institutionalized for mental illness and other causes. That program saw the development and use of gas chambers, later employed against Europe’s Jews and other groups in Nazi death camps.

When Hizme, who was born in Prague, arrived at Auschwitz, she remembered the stifling, stinking conditions in the cattle car she and others rode and how relieved everyone was when the doors opened at their destination and let in fresh air. The relief for the 6-year-old and others didn’t last long, as they were rousted from the car and sorted, a duty carried out by doctors, with some prisoners going to the camp and others to the gas chambers.

Because Mengele had an interest in twins for his heredity experiments, she and her brother were kept alive. She believes that she was experimented on while her brother was used as a control. She recalled X-rays and many injections whose contents she still doesn’t know, and of being sick in the camp hospital many times. During one of those times, all the patients were gassed, while she was saved by a nurse who hid her under her skirt.

“I was young, so I really did not understand what was going on,” Hizme said.

Julie Hock, New England regional director of the U.S. Holocaust Museum, said the organization has had many exhibits over the years, but this is the first that begins to answer the question on people’s minds as they try to grasp the enormity of what happened: How was this humanly possible?

Susan Bachrach, the exhibit’s curator, and Boston University Professor Michael Grodin, who has written about Holocaust doctors, laid out how the rediscovery of Gregor Mendel’s genetics experiments led to the growth of the global eugenics movement in the early 1900s. Eugenics organizations, seeking human perfection, were active in many countries, including Germany and the United States. In America, many states had forced-sterilization programs, backed by the Supreme Court, which in 1927 upheld Virginia’s such program for the “feebleminded.”

Grodin said physicians played not just a bit part, but a central role in both the eugenics philosophy and in its eventual translation into Nazi programs to “disinfect” society. Doctors had a much greater representation in the Nazi Party than average Germans and played key roles throughout.

“Physicians were not victims; they were perpetrators,” Grodin said. “Nothing was inevitable; choices were made.”

Grodin cautioned against thinking that the Holocaust was an isolated event, and exhibit organizers said the displays are intended to provide food for thought for some of today’s ethical questions. After all, Grodin said, black soldiers who liberated the prison camps were fighting in segregated companies, interracial marriage was outlawed in many states, and medical experiments in the United States have been repeatedly carried out against unwilling participants.

Grodin cited the Willowbrook experiments, in which hepatitis was given to mentally retarded children in New York for 14 years in the 1950s and 1960s, the Tuskegee syphilis experiment, carried out on unsuspecting black men between 1932 and 1972, and the injection of patients at the Jewish Chronic Disease Hospital with live cancer cells in 1962.

Grodin said the Holocaust reached the scale it did because it was state-sponsored instead of just supported by individuals. Still, he said, it is instructive to understand the smaller steps that ultimately led to the Nazi death camps.

“I think we have to be very concerned when we take small steps,” Grodin said.