Climate change for the long haul 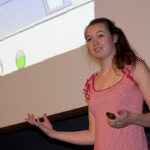 I Am My Filter and more

Conference sees long-term changes ahead, even if emissions are stopped

As governments around the world debate steps to slow emissions of greenhouse gases that cause climate change, scientists like Susan Solomon are peering into the future and reaching an uncomfortable conclusion: Even if emissions are stopped in a few decades, the greenhouse gases already in the atmosphere will continue to affect the planet for 1,000 years.

Solomon, a senior scientist in the National Oceanic and Atmospheric Administration’s Chemical Sciences Division, said that long-range computer models show that if greenhouse gas emissions peak in 2100 and fall after that, the carbon dioxide in the atmosphere will decline only slowly. Global temperatures, she said, will remain elevated for a millennium, and sea levels will still rise because of thermal expansion, flooding lowland areas around the globe.

“The temperature we wind up with will be around for 1,000 years, and sea levels will continue to rise,” Solomon said.

Solomon was among several speakers at the Radcliffe Institute for Advanced Study on Friday (April 15) for the institute’s ninth annual science symposium. Astronomy Professor Dimitar Sasselov, senior adviser to the institute’s science program, introduced the symposium, saying that the event, “Something in the Air: Climate Change, Science and Policy,” was a chance to take an interdisciplinary look at climate change.

The event featured a range of speakers largely from outside Harvard, Sasselov said, to bring other perspectives to campus. Speakers from Princeton University, the Washington University in St. Louis, Massachusetts Institute of Technology, the University of Calgary, and other institutions discussed topics as diverse as the effect of climate change on oceans and human health, politics and clean-energy innovation, geo-engineering, water vapor and climate change, and past human adaptability to the change.

Jennifer Smith, associate professor of earth and planetary sciences at Washington University, said that if humanity is to rely on tried-and-true coping mechanisms that helped it to survive past episodes of climate change, it may be in trouble.

In search of lessons that may be applicable today, Smith examined past societies that are thought to have been affected by changing climates, albeit on regional rather than planetary scales. She looked at the Khmer Empire at Angkor, in what is today Cambodia. By the 12th century, Smith said, an agricultural civilization based on the monsoon rains had arisen and lasted until the 15th century. Looking at archaeological remains shows that the Angkor area had elaborate canals and other waterworks designed to harness the seasonal monsoons for agriculture. A combination of severe droughts interspersed with heavy, destructive monsoons appears to have wrecked the infrastructure and contributed to the civilization’s downfall.

Smith said the multiple hits at Angkor illustrate the importance of resiliency if a civilization is to survive serial calamities, both natural and manmade, that can intensify the impact of any one disaster.

One observation that emerges from the archaeological evidence, Smith said, is the importance of migration as a human coping mechanism for catastrophic change. The archaeological record of North Africa shows that migration has been an important way for humans to deal with periods of drought in the region that today is dominated by the Sahara desert. It may have been a migratory response to drying climate in East Africa’s Rift Valley region, coupled with a wetter period in North Africa, in fact, that fueled one of two major migrations from the area early in human history, Smith said.

Migration may have been an important survival tool for early humans, but with humanity spread around the globe and with climate change affecting the whole planet, that may not be a tool that can be used effectively today, Smith said.

“What comes out is just how important migration has always been as an adaptive response,” Smith said. “I see it as a warning that we can’t deal with it as we did.”