At college, but almost home 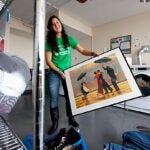 When this freshman needs something from home, she walks there

During Opening Days, every Harvard freshman gets asked the same set of questions over and over: “What dorm do you live in? What are you thinking of concentrating in? Where are you from?”  When I was asked the third question, I didn’t give a customary answer. Instead, I pointed.

Many of my classmates had trouble believing that I spent 18 years living and going to school in Cambridge before I moved down Oxford Street last August to become a student at Harvard College.  For them, Cambridge and Harvard were so linked that they could barely think about one without the other.

But when I was growing up I didn’t think about Harvard much.  It was just easier to ignore than to notice, and be irritated by, all the hurried students and the colorful fliers everywhere.  The only time I ever really paid much attention to Harvard was on graduation day, when people complained about the traffic.  To me, Harvard Yard wasn’t anything special. I don’t think I ever wondered once what was beyond the walls of the brick buildings I passed almost daily.  Now, I live in one of them.  Before, the stately houses on Memorial Drive were just scenery.  Now I know them all by name. I had a bit of a wake-up call this fall when I realized that I had been ignoring such a large part of my hometown for my whole life.

While I was ignoring Harvard, though, I had some semblance of peace when I went to Harvard Square.  When I first arrived on campus, among 1,400 freshmen, I felt like my territory was being swarmed.  Everywhere I went, instead of seeing a bunch of strangers who didn’t much matter to me, I saw eager freshmen or superior upperclassmen taking over something that was mine.  I liked introducing my new friends to my favorite places, but I also felt selfish about them.  My mental image of restaurants, stores, frozen yogurt shops — they were all Harvardy now.  I was Harvardy now.  I was one of those students running around the square crossing Mass. Ave. without waiting for the traffic light.  I couldn’t reconcile my vision of myself as a Harvard student with that of myself as a Cantabrigian.

I got over it.  I realized that it was silly to feel so possessive about Cambridge. Harvard students have been here since 1636, after all.  More importantly, I came to appreciate that I can have two cities in one.  I have the Harvard-Cambridge that I now live in for eight months out of the year and am still discovering, and I have Hometown-Cambridge, the place where I grew up, where I went to high school, where my friends live.  And sure, sometimes they overlap (and maybe I still cringe when I hear my classmates call Pinnochio’s “Noch’s”), but these days I find such quirks more funny than anything.

Now, I’m convinced that I have the best of both worlds.  There are certain advantages to having home so close to college (and no, I don’t make my mom do my laundry).  My dog is just a short walk away.  I don’t have to try a million burrito joints to decide which one is my favorite — I did that a few years ago.  I already know how to take the T.  I loved being able to walk down the street when I realized in the third week of school that I had forgotten to pack my rain boots.  I love that I can go sleep in my own bed for a night if I’m feeling sick.  I love going to see my high school’s plays and dance performances.

But what I love most is being in Cambridge.  I love these streets and these people.  And now I have a more complete picture of my city, a picture that no one who just grew up in Cambridge or who is just a Harvard student could ever have, a picture that makes me appreciate my hometown even more. Like most young people, I don’t want to live in the same city for my whole life.  I’ll leave Cambridge someday, at least for a while, but I’ll probably come back.  And for now, I’m good, right where I am.