An interim dean for Radcliffe 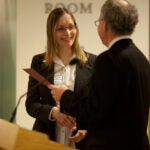 President Drew Faust announced today (April 29) that Lizabeth Cohen, Howard Mumford Jones Professor of American Studies in the Faculty of Arts and Sciences (FAS), will serve as interim dean of the Radcliffe Institute for Advanced Study, beginning July 1. The current dean, Barbara J. Grosz, will step down at the end of this academic year.

“I am very pleased that Professor Cohen has agreed to lead the Radcliffe Institute while the search for a permanent dean is under way,” said Faust. “She is a top scholar in her field, an active University citizen, and a former Radcliffe fellow whose broad intellectual interests and collaborative style will make her an excellent leader of Radcliffe during this transition year.”

“As a Radcliffe fellow and Harvard faculty member, I have watched the institute over the past decade become a dynamic part of the University’s intellectual life.” said Cohen. “Radcliffe has established itself as a rarity among institutes of advanced study, for its strong connections to a university community and for its deep commitment to furthering scholarship on women, gender, and society. I consider Radcliffe a model of vibrant, boundary-crossing collaborations in the sciences, the social sciences, and the humanities. These are important times for the institute, and I am eager to do my part during this next year to continue the progress made by Drew and Barbara.”

An expert on 20th century American social and political history, Cohen is author of “Making a New Deal: Industrial Workers in Chicago, 1919-1939,” which won the Bancroft Prize in American History and the Philip Taft Labor History Book Award, and was a finalist for the Pulitzer Prize. Her most recent book, “A Consumers’ Republic: The Politics of Mass Consumption in Postwar America,” explores how an economy of such consumption shaped social life, culture, and politics following World War II. Cohen has published widely in top history and urban studies journals, winning numerous awards and distinctions. Her writings have also appeared in edited collections and popular venues including the New York Times, the Washington Post, the American Prospect, and the Boston Herald. She is also co-author with David Kennedy of a widely used United States history college textbook, “The American Pageant.”

Cohen’s current book project, “Saving America’s Cities: Ed Logue and the Struggle to Renew Urban America in the Suburban Age,” considers the benefits and costs of rebuilding American cities through the life and career of urban planner Edward J. Logue, who contributed to major redevelopment projects across the Northeast, including the “New Boston” that emerged in the 1960s.

In addition to her scholarship, Cohen has made significant contributions to Harvard’s institutional life since arriving in 1997 from New York University. Cohen has served as chair of the Department of History, director of the Charles Warren Center for Studies in American History and co-chair of the Harvard College Curricular Review’s working group on pedagogy, which released its final report in 2004. She served as co-chair, with Mohsen Mostafavi, dean of the Graduate School of Design, of the Common Spaces Steering Committee, and continues to serve on the Advisory Committee for Common Spaces Projects.

Cohen has been a longtime member of the FAS Standing Committee on the Status of Women and served on the Harvard Task Force on Women in 2005. She has also been a member of the Tanner Lectures Committee, the Social Sciences Chairs Council, the History Department Planning Committee, the FAS Resources Committee and Faculty Council, and administrative committees for the Charles Warren Center, the History of American Civilization Program, the Center for History and Economics, and the joint Ph.D. program between the Graduate School of Design and FAS, among other assignments.

Among her many honors and awards, Cohen has been a fellow of the Guggenheim Foundation, the National Endowment for the Humanities, the American Council of Learned Societies, and the Radcliffe Institute. In 2001, she served as president of the Urban History Association. During the 2007-08 academic year, Cohen taught at Oxford as the Harold Vyvyan Harmsworth Professor of American History. Cohen received her undergraduate degree from Princeton University and her master’s and doctorate in American history from the University of California, Berkeley.