A match of climate and history 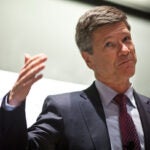 Ancient Roman poetry and climate science may seem to have little in common, but a recent collaboration between a Harvard historian and European climate scientists highlights the potential for the two fields to illuminate each other and deepen the understanding of both nature’s and humankind’s past.

Michael McCormick, the Francis Goelet Professor of Medieval History, has collaborated with climate scientists three times in recent years, searching for witnesses to climate extremes gleaned from tree-ring data during the late Roman Empire and after, investigating the effect of volcanoes on climate and civilization during the time of Charlemagne, and, in an article soon to be published, looking at climate data and historical accounts in the centuries after the Roman Empire fell.

McCormick said he recently brought to class a precipitation chart developed in his work with a European team on the climate of the first millennium, published online by the journal Science in January. The class was studying a Roman poem from the year 371. The work mentions that a region of the Roman Empire was then very dry. McCormick showed students the chart, which has a deep, plunging spike denoting a drop in rainfall in the same region, around the same year.

“If you would have told me 10 years ago that I could walk into an undergraduate seminar, read a poem by one of the Roman Empire’s leading poets which describes a drought that he saw as he rode along a ridge and that literary specialists had dated to 371 — but couldn’t be sure — and then pulled out the chart of rainfall in that part of the Roman empire in 371 — it’s just extraordinary,” McCormick said. “This is a new world of historical investigation.”

McCormick said his work to bring climate science into historical research and provide historical context stems from his receiving a distinguished achievement award from the Andrew W. Mellon Foundation in 2002. The $1.5 million award allowed him to convene groups of scholars studying similar questions in different fields as a way to improve information sharing, relationships, and collaboration. The first such workshop was on climate science and led to a collaboration among McCormick, Paul Mayewski of the University of Maine’s Institute for Climate Change, and Paul Dutton, a professor at Simon Fraser University in Canada. The collaboration resulted in the Charlemagne article, published in 2007 in the historical journal Speculum.

More recently, McCormick worked with a team of climate scientists from Swiss, Austrian, and German institutions on an analysis of three new collections of tree-ring data involving 7,000 Central European trees going back 2,500 years. The work illustrated that times of upheaval coincided with periods of precipitation extremes. McCormick’s role was to search for witness accounts from towns across Central Europe to see if they confirmed or conflicted with the tree-ring data.

McCormick delved into Widener Library’s extensive collection of town records from first millennium Germany and France, searching for eyewitness accounts of 32 years that the tree data indicated had precipitation extremes. He found 88 accounts, from in or near the forest where the tree data were collected, confirming the data findings for 30 of the 32 years.

“With Widener Library, I knew I could get every darn city chronicle from every little town in the Rhineland, in Bavaria,” McCormick said. “They’ve been collecting them nonstop since the first library burned” in 1764.

The results showed that long periods of stability and prosperity for Roman and medieval civilizations were associated with lengthy wet and warm growing seasons. Climate variability and precipitation extremes occurred from 250 to 600, coinciding with times of turmoil, including the barbarian invasion and the demise of the Western Roman Empire.

“There’s a clear change in the precipitation regime in the third century A.D. that happens to be a time of extreme crisis economically, militarily, politically in the Roman Empire. In an agrarian society, one can imagine precipitation fluctuation and change could have a negative impact,” McCormick said. “This new data changes the way we understand the written sources. Now we can go back and see them in a new light.”

The collaboration, McCormick said, shows that the historical record can be used to confirm scientific findings and that climate science can be used to enrich historical study and illuminate possible causes of significant historical events. One climate scientist told McCormick that historians, because of their access to written records, just may have the best proxy data on human-climate voices.

“But we also know the vagaries of human speech and that the act of consigning speech to writing can be a very complicated thing,” McCormick said. “That’s where the historian can come in and bring their expertise on human utterances of the past to bear and put it at the disposition of climate scientists.”