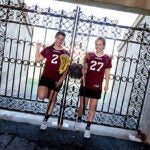 Sustaining a way of life

The crest of Currier House shows a field of red, representing Harvard, surrounding a simple golden tree. Within their own communal “tree,” Currier residents have been “greening” the way they live. They are led by Eco REP (Resource Efficiency Program) Devon Newhouse ’13, the House point person for the Office for Sustainability, who fields energy-saving ideas from fellow housemates, and then institutes them.

One idea came from Currier resident Daniel Gross ’13, who suggested running a vegetarian/vegan challenge. About 20 students signed on and are trying to remain meat-free for a combined 200 days. Gross recently taught a vegan baking class in conjunction with the challenge.

Another student, Maggie Armato, revamped the “dishware drive” at Currier. The dining hall was spending $12,000 each year on dishware because students were leaving it in their rooms and sometimes throwing it in the trash. Armato suggested adding two collection days to a one-day drive and placing bins on every floor. She created posters to increase awareness. The result was immediate. Nearly every bin was full, and 15 times as many dishes were collected as in past drives.

Some of the Eco Projects earn Currier points toward the coveted “Green Cup” for which the Houses are competing. Building Manager Manny Casillas has been helpful, said Newhouse, conserving resources by replacing more than 100 toilets with new dual-flush toilets, installing more than 100 motion light sensors, and replacing many incandescent lamps with compact fluorescent lamps. He also has replaced old single-pane windows with double-pane ones.

Newhouse, who grew up in Southern California with its rolling blackouts and water shortages, came to Currier with a heightened awareness of the importance of sustainability. With that, she is creating an even greener Currier.