A director of BGLTQ student life 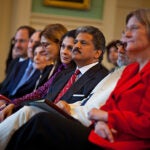 Harvard College Dean Evelynn M. Hammonds announced on Wednesday (April 27) that she will appoint a new director to coordinate resources and develop programming in support of bisexual, gay, lesbian, transgender, and queer (BGLTQ) undergraduates on campus.

Hammonds, the Barbara Gutmann Rosenkrantz Professor of the History of Science and of African and African American Studies, said the director will be a resource for undergraduates who identify as BGLTQ or have questions about their sexuality, and for all students who want to help create a supportive climate for their classmates.

“The new director will bring together the College’s existing — and substantial — supports for BGLTQ students, and also take a leadership role in the creation of new programs and initiatives,” she said. “I’m very pleased to announce the establishment of this important new position within the College’s student support services.”

Establishing the new position was the primary recommendation of the BGLTQ Working Group, created last fall and made up of Faculty of Arts and Sciences faculty, student leaders, and administrators to explore various facets of the BGLTQ student experience at Harvard. According to Paul J. McLoughlin II, associate dean of Harvard College and senior adviser to Hammonds, the College will also address one of the group’s other major recommendations: creation of a centrally located, accessible space to house the office of the new director. Space in Boylston Hall will be re-purposed to house this office, which will provide curricular connections to the Committee on Degrees in Studies of Women, Gender, and Sexuality.

Hammonds also said the new director will be in charge of reviewing and implementing the working group’s other recommendations, which include improved coordination of physical and mental health resources, establishment of a centralized information website, and collaboration with the Harvard Gay and Lesbian Caucus (HGLC).

“A full-time director of BGLTQ student life will facilitate progress on all areas of concern identified by the working group,” she said. “It is for precisely this reason that I am launching a national search for a new director as a first step in addressing the working group’s subsequent recommendations.”

HGLC President Rhonda Wittels ’79 said she is excited about this new chapter in the group’s partnership with the College.

“HGLC has a long history of supporting students and providing programmatic and financial assistance through its Open Gate Foundation,” said Wittels. “We look forward to working with the new director while continuing our support for BGLTQ undergraduates at Harvard.”

Susan Marine, assistant dean of the College for student life and director of the Harvard College Women’s Center, served as co-chair of the BGLTQ working group. She said the environment for BGLTQ undergraduates has improved dramatically over the last generation. As evidence, she pointed out that since 1985 the College has implemented the Bisexual, Gay, Lesbian, Transgender and Supporters adviser program in the Houses and in the Yard; provided space for the Queer Resource Center; and contributed funding, office space, and advisory support to CONTACT (the BGLTQ-specific peer counseling group). These resources — as well as the proliferation of BGLTQ student groups and well-staffed Mental Health Services — recently earned the College a rating of 4.5 out of 5 stars from the nonprofit advocacy group Campus Pride. The lack of a director of BGLTQ student life was the one place where Harvard fell short of its peers.

“We’re doing good things,” Marine said. “We provide resources, but we are really the only institution among the Ivies and other elite colleges that does not have a designated point person whose job is to ensure that BGLTQ resources are coordinated, publicized, and accessible. As a result, several College administrators serve as advisers in this area, but this informal approach can create confusion for students about where to go.”

Student leaders who served on the working group reacted positively to Hammonds’ announcement. Marco Chan ’11, co-chair of the Harvard College Queer Students and Allies (QSA), said the director will fill an important gap in the College’s support for the BGLTQ community.

“Right now, oversight of the well-being of the BGLTQ community is divided among student leaders, faculty, and staff members,” he said. “I’m so excited to see that we’ll have one person to carry this charge, to make accessible all the fantastic resources we already have, and to provide continuity of leadership and a long-term vision.”

Chan’s concerns about oversight and coordination of BGLTQ life reflected those expressed by students during the working group’s data-gathering phase. In a survey, 25 percent of respondents somewhat or strongly disagreed with the statement “Students at Harvard know how to access support and information (when needed) about issues common for BGLTQ students.” The number was actually higher among those who self-identified as BGLTQ, 39 percent of whom somewhat or strongly disagreed.

Chan’s QSA co-chair, Emma Wang ’12, was also a member of the BGLTQ Working Group. She said she is happy to hear about the new director, but cautioned that BGLTQ students still face challenges and that there’s work to do to improve the campus culture.

“Many undergraduates — particularly international students and those from some religious backgrounds — still feel as though they have to choose between coming out and the support of their family and friends,” she said. “The advisory board I will be on next year will continue the work we started last fall and keep the ball rolling as Harvard thinks about changes and restructuring BGLTQ resources.”

Chan, who graduates this year, said the long-term goal of the BGLTQ Working Group is to move campus culture beyond tolerance to affirmation of BGLTQ life. He said he looks forward to returning to Harvard for his 10-year reunion to see how things have changed by then.

“I want to see a campus where BGLTQ students are happy and comfortable to be who they are in everything that they want to do,” he said. “I want Harvard to be a place where they can bring their … identity to their academic, social, and creative lives, and can feel whole and supported.”