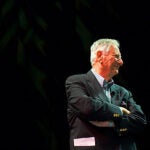 The National Humanities Medal honors individuals or groups whose work has deepened the nation’s understanding of the humanities, broadened citizens’ engagement with the humanities, or helped preserve and expand Americans’ access to important resources in the humanities.

Aaron was recognized for his contributions to American literature and culture. As the founding president of the Library of America, he helped preserve the nation’s heritage by publishing America’s most significant writing in authoritative editions.

Bailyn was recognized for illuminating the nation’s early history and pioneering the field of Atlantic history. Bailyn, who spent his career at Harvard, has won two Pulitzer Prizes, one for “The Ideological Origins of the American Revolution” and one for “Voyagers to the West.”