Tracking your friends and idols 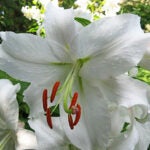 How the lily blooms

Varon and Axel Hansen, two Harvard sophomores, have created a new website that seeks to out-Google Google when it comes to tracking news about your friends.

“Facebook is so full of social noise that you don’t get the important stuff,” Varon said. “There’s less content here than if you went to [someone’s] Facebook page, but it’s more meaningful.”

Varon and Hansen met during their freshman year. Though Hansen had some computer skills when he arrived, Varon says his are entirely the result of Harvard computer science courses, including CS 50, the introductory course that has been credited with adding computers to more than one student’s study plans.

The two pooled their talents and, over the past six months, developed Newsle (pronounced “news-el”), a site that crawls the web for you to find news and blog posts about your friends, celebrities, and even politicians you might want to follow.

“You could Google around and find it, but it’s not really available anyplace else,” Varon said. “We wanted a way to find out all the cool stuff all our friends had done in high school or college without them having to post it. People don’t necessarily post news about themselves. It seems arrogant.”

To get around the difficulty posed by people with similar names, they created an algorithm that uses personal details, such as where a person lived, where he or she worked, or where they went to school to make sure Newsle retrieves the right John Smith or Jane Doe.

“Our goal is to be better at Googling someone than Google is,” Varon said.

The two have already had a measure of success. The site, though in beta testing, has had thousands of people sign up and, on March 8, won a $10,000 grant in the Harvard College Innovation Challenge, which is sponsored by the Technology and Entrepreneurship Center at Harvard. Varon and Hansen have also talked to potential investors and made a presentation to the Boston Web Innovators Group.

After you join the site, you give Newsle permission to import your Facebook or Linked In contacts. Once it does that, the site searches the web for relevant content and brings it to your screen. You can filter your news feed by just friends, friends and public figures, or just public figures. You can also see all news the site retrieves or reduce the number of items in your feed by filtering by importance. Newsle will also email you news feeds about your friends periodically if you set that as a preference.

Varon said the creators are working on new features for the site, such as ranking the prominence of public figures and personal friends. They’re also approaching key people in such areas as economics or biology, and asking them which top 10 people in their fields they would be interested in following. That will allow Varon and Hansen to compile lists of those to follow by expertise, and it will let Newsle users just click on the recommendations if they want to begin following those figures without having to search exhaustively.

“It’s pretty exciting because we don’t know how big it can be,” Varon said. “We think that everyone can get utility out of it, news about friends, contacts, or public figures they’re interested in.”