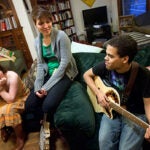 A look inside: Dudley House Co-op

Water polo-playing sisters Aisha and Shayna Price took it upon themselves to make Harvard notice them.

Living 2,000 miles from the U.S. mainland, in Honolulu, the sisters Price became entrepreneurial makers of their own destiny. Realizing Harvard recruiters would be hard-pressed to travel the 5,000 miles from Boston to check out their athletic chops, the sisters tirelessly emailed Harvard coaches and asked their coaches in Hawaii to serve as advocates for the pair.

Aisha ’13 was first recruited by Harvard to play soccer, which was the sisters’ main sport until they discovered water polo during middle school.

“It’s been such a blessing for me to play both sports here,” said Aisha (pronounced eye-shuh). “My freshman year I missed Shayna a lot because I’ve played on the same team with her all my life, and it was really different not seeing her in the water next to me. It’s been really fun playing with her a year later after it all worked out.”

“This is the most ideal situation ever,” echoed Shayna, a freshman, who is 14 months younger than Aisha. “This is the best school in the country, and we get to play water polo, and Aisha gets to play both water polo and soccer.”

Aisha was named the team’s Rookie of the Year for 2010, and this season the sisters, who are both attackers, have scored more than 20 goals each.

“We definitely have a connection in the water,” Shayna said. “A lot of people don’t understand how hard the game is — you’re treading water the whole time — especially on the East Coast where water polo is not big at all.”

The sisters miss the Hawaiian weather the most. And their family.

“We ate family dinners every night back at home,” said Aisha. “Our parents would come to every one of our games. Our dad is our coach even across the continent and the Pacific Ocean — we call him every time before a game and give him the rundown after.”

And there’s that friendliness factor.

“East Coast people don’t quite have the ‘aloha spirit’ as the people back at home,” said Shayna.

“But we both really love it here,” added Aisha, who is concentrating in East Asian studies.

Fluent in Chinese, she hopes to travel to China, while Shayna plans to pursue social anthropology, with a secondary concentration in global health.

“I’m hoping to take advantage of all the study abroad opportunities Harvard has to offer,” said Shayna.

Though they are sisters, best friends, and teammates, “Our water polo team is also a team of sisters,” Aisha said. “Yes, Shayna and I are blood sisters, but the team is our best friends, in and out of the pool.”

And as sisters, one makes up for what the other lacks.

“I’m a terrible driver. How many times did I fail my driver’s test? Three or four times?” asked Shayna.

“But even though Shayna’s the younger one —”

“I keep her in line,” Shayna interjected.

Yes, they even finish each other’s sentences.