The voice of reform 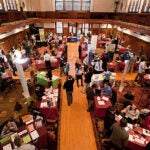 The lure of green

Liberian President Ellen Johnson Sirleaf, a Harvard Kennedy School alumna who at great personal risk played a key role in stabilizing and reviving a troubled nation that until recently was categorized as a “failed state,” will be the principal speaker at Afternoon Exercises of Harvard University’s 360th Commencement on May 26.

“Over the course of her nearly 40 years in public service, President Sirleaf has endured death threats, incarceration, and exile, all the while challenging the inequality, corruption, and violence that defined life in Liberia for so long,” Harvard President Drew Faust said. “We are proud to welcome such a respected African leader and active proponent of democracy to speak on Commencement Day.”

The first woman elected head of an African state, Sirleaf became her nation’s 24th president in the wake of the Second Liberian Civil War. She faced the daunting tasks of reconciling the country after two decades of strife, revitalizing its collapsed economy, reducing its national debt, and reforming its international reputation. Her work both nationally and internationally has earned her a reputation as a strong leader, an advocate for economic prudence, and an enemy of corruption. As a result, bilateral relations with several countries have been re-established, United Nations sanctions on Liberia’s diamond and forestry sectors have been lifted, substantial foreign direct investment has been attracted, and international support for the poverty-plagued nation has blossomed.

“As Africa’s first female elected head of state, she stands as an example for a generation of girls in Africa and beyond of the ways in which education opens new frontiers,” Faust said.

Raised in Monrovia and married at 17, Sirleaf came to the United States in 1961, studying at Madison Business College in Madison, Wis., and the Economics Institute in Boulder, Colo., before earning her M.P.A. degree as an Edward S. Mason Fellow at Harvard’s Kennedy School of Government in 1971.

Sirleaf returned to Liberia in 1972 and served as assistant minister of finance, but resigned a year later in protest of government spending. In 1979 she was appointed minister of finance, but she was forced to flee the country after surviving a military coup in which President William Tolbert and all but four members of his cabinet were executed. Sirleaf returned to Liberia in 1985 to run for vice president. Her stances against dictatorial repression earned her prison sentences, and in 1986 she fled to the United States. She returned to Liberia to run in the 1997 general elections, placing second, but returning to exile soon after. In 2003, Sirleaf was selected to chair a governance reform commission, a position she left to run successfully in the 2005 presidential elections.

“President Sirleaf is a prime example of an alumna who has embraced the ethic of public service and improved life for millions through her commitment to serving the public good,” said Robert R. Bowie Jr., president of the Harvard Alumni Association. “Her career is a reminder of the global reach of the graduates of Harvard and the importance of the University’s international engagement.”

Sirleaf will speak during Commencement’s Afternoon Exercises, which serve as the annual meeting of the Harvard Alumni Association. The exercises will take place in the Tercentenary Theatre of Harvard Yard.