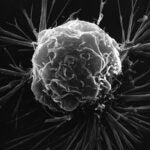 New hope for the cure

A section of the AIDS virus’ protein envelope once considered an improbable target for a vaccine now appears to be one of the most promising, new research by Harvard-affiliated Dana-Farber Cancer Institute scientists indicates.

The section, a twisting strand of protein known as the V3 loop, is an attractive vaccine target because immune system antibodies aimed at the loop may offer protection against multiple genetic subtypes of HIV-1, the virus that causes AIDS. This is a key prerequisite of any AIDS vaccine because the viruses mutate rapidly and by now comprise millions of different strains that are grouped into different genetic subtypes, or “clades.” The researchers’ findings are published online in the Public Library of Science journal PLoS One.

In the study, investigators injected a monoclonal antibody — a preparation of millions of identical antibodies that fight viral infection — into Asian monkeys known as macaques. The antibody came from a person infected with a specific clade of HIV-1. The macaques were then exposed to virus of a different clade.  Investigators knew the antibody would latch onto a portion of the virus’ V3 loop, potentially barring the virus from invading nearby cells, but they didn’t know whether it would prevent infection from a separate subtype of the virus.

The results were striking: All of the treated monkeys were protected from infection by the monkey form of HIV-1, known as SHIV. Monkeys exposed to the virus without receiving the monoclonal antibody, by contrast, became heavily infected.

“This is the first time a monoclonal antibody made against an AIDS virus of one clade has provided complete protection against an AIDS virus of a different clade in animal models,” said the study’s senior author, Ruth Ruprecht of Dana-Farber and a professor of medicine at Harvard Medical School (HMS). “Previous studies have shown that such neutralizing antibodies can protect macaques from infection within one clade; but as more clades of the AIDS virus evolve, it has been unclear whether such antibodies could shield across different clades and prevent infection. Now we have an answer.”

AIDS vaccines need to be broadly effective, Ruprecht said, offering protection from a range of HIV-1 subtypes anywhere in the world. It is particularly important for such vaccines to shield against clade C, which accounts for almost 60 percent of worldwide AIDS cases and predominates in sub-Saharan Africa, India, and China. In many parts of the world, clade C has combined with clade B, but retains a clade C protein envelope. Ruprecht and her colleagues have showed that the antibody against the V3 loop prevented infection by a clade C virus.

The antibody treatment technique used in the study is unlikely to confer long-term protection against HIV-1 because the infected antibodies do not remain active in the body for very long. The value of the study is that it demonstrates that antibodies directed against the V3 loop of one clade of HIV-1 can create an immune system shield against another clade.

To translate this discovery into a vaccine, researchers need to devise a way to focus the body’s immune system responses to the small portion of the V3 loop that is shared by viruses of different clades. The immune system could then generate its own protective antibodies against the virus. One way of accomplishing this may be to create small molecules that represent this special region inside the V3 loop so the immune system can recognize and attack it.

The study’s findings represent something of a vindication for the V3 loop as an immune system target, Ruprecht remarked. While scientists have long known that V3 can spark an immune system response to HIV-1, the loop was thought to be a clever “decoy:” the body would produce antibodies that home in on V3, but these would be unable to block infection by slightly different versions of the AIDS virus. The V3 loop has long been known to mutate very rapidly.  Viruses with slightly altered protein envelopes would then begin the infection process. The study has shown that a special region of V3 is a prime target, after all.

The study was funded by grants from the National Institutes of Health, the Bill and Melinda Gates Foundation Collaboration for AIDS Vaccine Discovery, and the Center for AIDS Research Immunology Core.