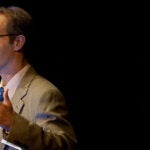 Golden age is under way in learning what conditions create it

With a space telescope churning out discoveries of new planets, robots exploring Mars and other places, and researchers gaining understanding of extreme environments, the search for the roots of life on Earth and other planets is in a golden age, an authority in the field said Wednesday (March 23).

“If there ever was a moment to think about the origins of life, it surely is now,” said Ralph Pudritz, director of the Origins Institute at Canada’s McMaster University.

Pudritz spoke at one of the regular forums sponsored by Harvard’s Origins of Life Initiative, an interdisciplinary, cross-school center aimed at unraveling one of the central mysteries facing humankind: how life arose in the universe. Origins Director Dimitar Sasselov, professor of astronomy, introduced Pudritz as the founding director of a sister organization of Harvard’s initiative: McMaster University’s Origins Institute, which was begun in 2004.

Pudritz’s talk, “Equipping Planets for Life,” reviewed recent advances in understanding planetary formation and what it takes to create the conditions and elements of life.

Pudritz acknowledged that our imaginations fail when thinking about exotic forms of potential life, but added that our current understanding of the process has a handful of requirements. Life is thought to exist only on rocky planets in the presence of water and an energy source with a supply of the biomolecules that make up living things.

Planets form by the accretion of material in a dusty disk around young stars. That material, Pudritz said, commonly includes ample water. Water is so common, in fact, that Pudritz said one study found that typical planets contain more water than Earth does.

Water alone doesn’t guarantee life. A rocky, watery planet must orbit in a star’s habitable zone, that narrow band whose extremes are defined in our solar system by Venus and Mars. Too close to the sun and water evaporates. Too far and it freezes.

The Kepler space telescope has given an enormous boost to this research, Pudritz said, by discovering more than 1,000 planets, some of which are thought to lie within this habitable zone.

Scientists believe that life arose on Earth around 3.5 billion years ago. Before that, the planet existed, lifeless, for a billion years. The conditions for life were developed in what Pudritz referred to as a “prebiotic soup” that contained, among other things, the necessary molecules.

Science has begun to answer the question of where those molecules originated, Pudritz said. Analysis of meteorites that have fallen to Earth have shown that some of them are rich in amino acids, the molecules that make up the proteins so important to life. His own research, published in 2009, illustrated that the 10 simplest amino acids used in living things are the easiest to create naturally and were likely available in the environment before life arose. More complex amino acids utilized in living things were probably added to the genetic code as life evolved.

“It appears that the makeup of the soup is determined by a simple law of physics,” Pudritz said.