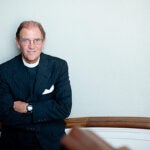 Professor John Stilgoe on the mysteries of Harvard Yard

If the angle of light is just right on a sunny December morning, an eerie message appears on the side of Sever Hall.

“Kent State 4 dead” is just barely visible in capital letters. At some point the number four was crossed out and replaced with the number seven. Defying the University’s efforts to completely erase it, the remaining, ghostly graffiti recalls a tragic day in American history.

Sever, the red brick Romanesque-styled work of Henry Hobson Richardson, also contains a mysterious crypt (an architectural quirk of its designer) and a curious arch at the entrance that looks onto Tercentenary Theatre. Those who stand to one side of the rounded entryway and whisper while facing the building can be heard clearly by those standing on the other end of the wall’s curve.

If one looks closely at Widener Library across the way, they might notice its steps are not as steep as those on the adjacent University Hall.

The reason, according to John Stilgoe, is that the construction of the massive library coincided with a short-lived fashion trend in women’s clothing in the early 1900s, one in which skirts were cinched tightly around women’s ankles making it impossible for them to raise their feet more than a few inches.

Those history lessons were just some of the many offered up by Stilgoe, Harvard’s Robert and Lois Orchard Professor in the History of Landscape Development and a self-described visual historian, during a discussion on March 4.

Stilgoe’s talk was part of FreeThink@Harvard, a new interactive e-learning series sponsored by the Dean of Students Office at Harvard Extension School. Each discussion is led by Harvard faculty and includes a classroom chat with a crowd of Harvard alumni, students, faculty, and staff that is also streamed online.

Stilgoe began his talk with a brief virtual tour that detailed some of the secrets of Harvard Yard. “The Yard is a rich visual environment and it rewards scrutiny,” the Extension School lecturer states at the beginning of the video. Following the presentation Stilgoe took questions from the classroom crowd and from online viewers as far away as England, the Netherlands, and South Korea.

“John’s gift to us, his greatest gift, is to teach us how to pay better attention to the physical world around us,” said Rena Fonseca, assistant dean of students and alumni affairs for Harvard’s Division of Continuing Education, who moderated the event. “As Thoreau wrote, ‘the question is not what you look at, but what you see.’ John teaches us to see.”

A member of the classroom crowd, Associate Dean for the Master of Liberal Arts program at the Harvard Extension School Sue Schopf, wanted to know where students could gain “the necessary eye and tools to be able to make these kinds of observations?”

Stilgoe urged Schopf and those listening both in the room and online to simply go outside.

“I think they ought to go out to recess more. I think we’re all too busy looking at screens and I think that we are not just spending time looking around,” said Stilgoe, adding, “I think it’s something that has to be encouraged before children go to kindergarten, and I think mostly it means going for a walk.”

The next FreeThink@Harvard talk, “Growth Companies: Succeeding Beyond the Start-up Phase,” is scheduled for April 29.