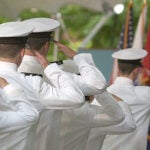 When introducing Adm. Mike Mullen at a Harvard Kennedy School forum Nov. 17, 2010, Harvard President Drew Faust said, “I want to be the president of Harvard who sees the end of ‘Don’t Ask, Don’t Tell’ because I want to be able to take the steps to ensure that any and every Harvard student is able to make the honorable and admirable choice to commit him- or herself to the nation’s defense.” That aim was reached with the signing of an agreement with the Naval ROTC March 4, 2011.