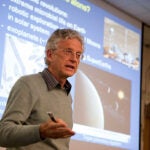 Harvard researchers believe new treatment may be near

Harvard stem cell researchers at Children’s Hospital Boston (CHB) have taken two important steps toward development of a new way of treating melanoma, the most virulent form of skin cancer.

In two letters featured on the cover of this week’s edition of the journal Nature, the researchers, led by Leonard Zon, chairman of the Harvard Stem Cell Institute’s (HSCI) governing committee and a professor in the University’s Department of Stem Cell and Regenerative Biology (SCRB), report isolating a gene that hastens the growth of melanoma tumors, and using an already-approved drug, in combination with a drug now working its way through the federal Food and Drug Administration (FDA) approval process, to uncover new potential therapeutic targets in melanoma.

Zon, who is also the Grousbeck Professor of Pediatrics at CHB and who heads the hospital’s stem cell program, said his group is now waiting for FDA approval of a drug that blocks the function of the gene BRAF, which has long been known as a melanoma promoter, and is “planning on starting clinical trials within six months of that approval. We’ll be doing the trials at Massachusetts General Hospital and Dana-Farber Cancer Institute.”

The path toward the new findings began in 2005 with the development by Zon’s lab of a zebrafish model of human melanoma, Zon said. It was further accelerated, said Richard White, lead author of the drug-related paper and a postdoctoral fellow in Zon’s lab, by researchers’ use of novel genetic and chemical approaches — including drugs already approved for other purposes — that are uniquely available in the zebrafish system.

In the White letter, the researchers report that early in melanoma development, the BRAF gene causes the cells to become more “progenitor”-like, resembling a type of embryonic cell called neural crest stem cells.

“We asked what happens in the early stages of melanoma to the cells that acquire BRAF mutation,” White said. “What we figured out pretty early is that one of the things that BRAF does is cause the animal to have too many embryoniclike neural crest cells. So we developed a chemical screen to find molecules that would suppress the neural crest cells.”

They then screened a library of 2,000 chemicals in zebrafish embryos to find ones that eliminated these neural crest cells. “We have a common strategy: We look for drugs that are used for something else, and ask whether they can then be used” for the disease being studied, White said. This strategy has the obvious advantage that a compound found to be effective in initial studies can be moved directly to human trials, because it already has FDA approval.

The chemical, called lefunomide, was found to inhibit a gene called DHODH. This drug was previously approved for treating rheumatoid arthritis. To make sure this wasn’t only effective in zebrafish, they asked Sean Morrison, a stem cell researcher at the University of Michigan, to test lefunomide on rat neural crest stem cells and found that it interfered with the process of self-renewal. “So at that point we had two really good pieces of evidence — in zebrafish and rats. So we said, ‘This looks really good; now let’s test it in human melanoma,’ ” White said.

By combining lefunomide with a drug awaiting approval that blocks the BRAF gene, they magnify the effect of two drugs that taken alone have a smaller effect. Together, said White, the drugs completely knocked out melanoma in several human cell tests, and reduced tumor size in melanoma cells transplanted into mice as well.

A second team in Zon’s lab, led by postdoctoral fellows Craig J. Ceol and Yariv Houvras, looked at a chromosome segment that was known to be amplified in human cancer, but it wasn’t obvious which gene was causing melanoma growth. By using a genetic screening approach in adult zebrafish, they were able to pinpoint a single gene, SETDB1, that accelerates the onset of melanoma. “Now that it’s known that SETDB1 is a cancer-causing gene, the question is how to find drugs that block SETDB1. Also, this may be a new prognosticator for the development of melanoma — tumors with SETDB1 may be more aggressive,” White said.