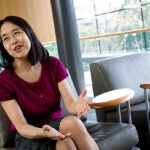 A new study by Harvard School of Public Health (HSPH) researchers shows that adults who regularly take ibuprofen, a nonsteroidal anti-inflammatory drug (NSAID), reduce their risk of developing Parkinson’s disease by about one-third compared with nonusers.

“There is no cure for Parkinson’s disease, so the possibility that ibuprofen, an existing and relatively nontoxic drug, could help protect against the disease is captivating,” said senior author Alberto Ascherio, professor of epidemiology and nutrition at HSPH.

The study will be published online March 2 in Neurology and is scheduled to appear in the March 8 print issue.

Parkinson’s disease, a progressive central nervous system disease occurring generally after age 50, affects at least half a million Americans, according to the National Institute of Neurological Disorders and Stroke. About 50,000 new cases are reported each year, with the number expected to increase as the U.S. population ages. It is hypothesized that ibuprofen may reduce inflammation in the brain that may contribute to the disease. Prior studies showed a reduced Parkinson’s disease risk among NSAIDS users, but most did not differentiate between ibuprofen and other nonaspirin NSAIDs.

In the new study, Ascherio, lead author Xiang Gao, research scientist at HSPH and associate epidemiologist in the Channing Laboratory at Brigham and Women’s Hospital, and colleagues analyzed data from nearly 99,000 women enrolled in the Brigham and Women’s Hospital-based Nurses’ Health Study and more than 37,000 men in the Health Professionals Follow-Up Study. The researchers identified 291 cases (156 men and 135 women) of Parkinson’s disease during their six-year follow-up study (1998-2004 in women; 2000-2006 in men). Based on questionnaires, the researchers analyzed the patients’ use of ibuprofen (e.g., Advil, Motrin, Nuprin), aspirin or aspirin-containing products, other anti-inflammatory pain relievers (e.g., Aleve, Naprosyn), and acetaminophen (e.g., Tylenol). (Although not an NSAID, acetaminophen was included because it’s similarly used to treat pain.) Age, smoking, diet, caffeine, and other variables also were considered.

“We observed that men and women who used ibuprofen two or more times per week were about 38 percent less likely to develop Parkinson’s disease than those who regularly used aspirin, acetaminophen, or other NSAIDs,” Gao said. “Our findings suggest that ibuprofen could be a potential neuroprotective agent against Parkinson’s disease, however, the exact mechanism is unknown.”

These findings raise hope that a readily available, inexpensive drug could help to treat Parkinson’s disease. “Because the loss of brain cells that leads to Parkinson’s disease occurs over a decade or more, a possible explanation of our findings is that use of ibuprofen protects these cells. If so, use of ibuprofen could help slow the disease’s progression,” Gao said.

The findings do not mean that people who already have Parkinson’s disease should begin taking ibuprofen, Ascherio said. “Although generally perceived as safe, ibuprofen can have side effects, such as increased risk of gastrointestinal bleeding. Whether this risk is compensated by a slowing of the disease progression should be investigated under rigorous supervision in a randomized clinical trial,” he said.