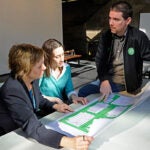 The American Repertory Theater’s (A.R.T.) founding director Robert Brustein was awarded the National Medal of Arts by President Barack Obama at a ceremony in the White House on March 2.

The National Medal of Arts is the highest award given to artists and arts patrons by the United States government. The medal, conferred by the president, is presented to individuals or groups who are deserving of special recognition by reason of their outstanding contributions to the excellence, growth, support, and availability of the arts in the United States. During the past 26 years, more than 250 extraordinary patrons and artists in the fields of visual, performing, and literary arts have been honored. With this medal, the president recognizes the wealth and depth of creative expression of America’s artists.

A.R.T. Artistic Director Diane Paulus expressed her joy at the award, saying: “I am thrilled to congratulate Bob on this significant honor. As founding director of the Yale Repertory Theatre and over three decades at the A.R.T., he has taught thousands of young people and inspired them to follow their dreams. His award-winning criticism, books, and plays have provided the most informed and intelligent insight into the world of theater. It’s wonderful that Bob’s extraordinary achievements are being recognized with this important award.”

Brustein founded the Yale Repertory Theatre during his tenure as dean of the Yale School of Drama and the American Repertory Theater in 1980; he served for 20 years as director of the Loeb Drama Center where he founded the A.R.T. Institute for Advanced Theatre Training at Harvard.  He retired from artistic directorship in 2002 and now serves as founding director.

He is the author of 16 books on theater and has also written extensively on Shakespeare. His book “The Tainted Muse: Prejudices and Presumption in Shakespeare and His Time,” was published in 2009. He has also written three plays about Shakespeare called “The Shakespeare Trilogy.” The first, “The English Channel,” about Shakespeare’s affair with the dark lady, Emilia Lanier, was produced at the Abingdon Theatre in 2009, where it was nominated for a Pulitzer Prize. His second play, “Mortal Terror,” about the Gunpowder Plot and the writing of “Macbeth,” will be produced at Suffolk University’s Modern Theatre this spring and at the Boston Playwrights’ Theatre in September 2011. “The Last Will,” his third play, about Shakespeare’s return to Stratford toward the end of his life, will be produced by the Abingdon in New York in fall 2012.

He is currently distinguished scholar in residence at Suffolk University and professor of English emeritus at Harvard University.