Not so different after all 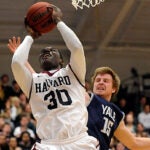 Harvard men drive on to ‘destiny’

The culture of Cambridge could hardly be more different from that of Twentynine Palms, Calif. Six months before my first day of classes at the Harvard Kennedy School, I stepped from a bus into the windswept high desert scrubland of Twentynine Palms, 200 days of patrolling in Iraq just behind me.

The California desert looks a lot like much of Iraq — which makes it an ideal training ground for military units about to deploy — and nothing like Cambridge. The former is a small town dominated by the massive Marine Corps base nearby and filled with a few thousand aggressive young men with clipped hair.

Months later, I drove down Memorial Drive in Cambridge thinking of a joke my father had told me when he heard I had been accepted. It began, “A philosophy-major hippie, a Kennedy, and Will Hunting walk into a bah.…” That seemed pretty accurate to me, and I prepared to find a difference in people that would make the change in climate seem trivial in comparison.

It wasn’t until this year, my second and last, that I began to see more clearly through the veneers of people who are, in the words of one of my professors, “very good at setting up a shell of invulnerability.” Yet what I found wasn’t so different from the many young officers I had worked with and for in the military.

The majority of my days in Iraq had run me through with biting doubt and fear, an experience that was both intensely personal and ubiquitous among my friends and fellow officers. As confident as we might have seemed to our subordinates, the truth was that we knew far less than what they assumed. We worried about everything from which route to take on a patrol to why we were even fighting a war. Thinking too long and hard about these topics in solitude can be depressing, if not downright dangerous; we naturally turned to our brothers in arms for reassurance, explanation, or sometimes just to know that someone else was there and listening.

Though the game, the stakes, and the bets are different at Harvard, the sense of uncertainty as graduation approaches feels very much the same. Where to live? What to do? What is life’s purpose? We are, after all, graduate students. In a fair world, questions like those should be reserved for wet-behind-the-ears undergraduates. Yet here we are, older and more knowledgeable but feeling none the wiser.

My classmates have done some incredible things just in the past few months: writing a story that made the front page of The Washington Post; starting an organization that may become the Netflix of voting (think about it); publishing a report on private-sector development in Afghanistan. In my head, these people are friends and as lost as I am about the future. But to the rest of the world, they are journalists, entrepreneurs, investors.

Yet to know them is to realize that their shells of invulnerability are as substantial as the second-story storefront facades of Twentynine Palms. Most of them, like me, came to the Kennedy School to figure out what to do next with their lives. No one that I know — myself included — has yet figured that out. Just like my friends in the military, they were struggling through major decisions with no one there to advise, to guide, to mentor.

What we do have, though, is our sense of community — our friendships of the lost. When a potential employer writes back in an email that begins, “Dear Sir or Madam,” there is little else to do but ring up another member of the club and share the tale of woe over a pint of Samuel Adams’ best. In that, the community I left behind and the one I found aren’t so different after all. Though the hair is longer and the language is a bit less vividly coarse, the desire to make a difference in the world and the concomitant pessimism about our ability to do so are equally present.

Despite our doubts and fears, my fellow officers and I did our days in Iraq as best we could, using hope and faith to fill the gaps where logic seemed to fail. Seeing the successes of the community of my past gives me hope for the community of my present — that despite our enormous debts and our ticking professional clocks, we will prevail as graduates in whatever fields we find ourselves.

And when we find new setbacks in the world beyond the Charles, we’ll know whom to call; when we pick up the phone for somebody else, we’ll know what to say. Maybe that wasn’t the point of graduate school, but if that’s what I take from it, well, I don’t think I’d trade it for anything else.

Sayce Falk is studying for his master’s in public policy at the Harvard Kennedy School.