No quit in Crimson 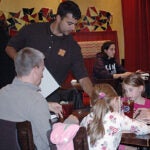 The season will continue for the Harvard men’s basketball team, despite a heartbreaking loss to Princeton on Saturday (March 12) that cost the squad a spot in the NCAA tournament. The Crimson have accepted a place in the National Invitational Tournament (NIT), and will play the Oklahoma State Cowboys on March 15 at 7:30 p.m. The game will be televised nationally on ESPN.

“We’re very fortunate,” said Harvard coach Tommy Amaker. “Only 100 teams play in the NCAA and NIT tournaments. We’re thrilled to be among them.”

Amaker acknowledged that he and his players were still feeling the sting of their last-second loss to Princeton. Both players and coaches are aware of the things they could have done better against the Tigers, he said.

“We didn’t do a great job defending in the paint, around the goal against Princeton,” he said. “We missed some free throws and we didn’t defend that last shot. There were lots of things.”

The team had hoped for an at-large berth to the NCAA tournament, but was passed over by the selection committee. Amaker says that the news of the Crimson’s first-ever NIT bid gave a welcome lift to players’ spirits.

“We had the kids in for a lift and stretch [Sunday],” he said. “They were sore physically and also a little down, but they felt better when we got the brackets set for the NIT. We’re on to the next thing now and I expect them to bounce back, the way they have all season.”

Harvard has its work cut out against Oklahoma State (19-13). Despite having the best won-lost record in its bracket, the Crimson were passed over for a top four seed, and so must travel to Stillwater, Okla., to play the Cowboys on their home court. Amaker says that news of the game came late on Sunday night, and left him and his players scrambling to make arrangements and prepare.

“We’re just finding out about Oklahoma State, compiling information and statistics,” he explained. “They’re similar in some ways to George Mason or to a healthy George Washington University team. They’re athletic and quick. They play a hard, up-tempo game. They’re a physical team up front. We don’t have a lot of time to prepare, but we’ll do our best.”

Amaker hopes that there’s plenty of basketball ahead for Harvard, but said that the season has already been a big success. The team clinched a share of the Ivy League championship for the first time in program history and, for the second year in a row, set a record for wins. Tuesday night against the Cowboys — only the third post-season game in the history of the program — Amaker’s squad will set its sights on another milestone.

“Harvard has never won a post-season game,” he notes. “Hopefully, our year is not done. We’ll continue to grow, push, and move along.”