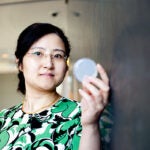 ‘Circuits of sense and sensibility’

Scientists have unveiled the most comprehensive picture to date of the full genetic blueprint of multiple myeloma, a form of blood cancer. A study of the genomes from 38 cancer samples has yielded new and unexpected insights into the events that lead to this form of cancer and could influence the direction of multiple myeloma research. This work, led by Harvard-affiliated scientists at the Broad Institute and Dana-Farber Cancer Institute, appears in the March 24 issue of Nature.

Multiple myeloma is the second most common blood cancer in the United States, and about 20,000 new cases are diagnosed in this country every year. The disease’s five-year survival rate is less than 40 percent, which is low compared with other forms of cancer. Multiple myeloma begins in the bone marrow, where plasma cells (a type of white blood cell) become malignant, crowding out normal cells and attacking solid bone. No one knows the cause of the disease — it can develop in people with no known risk factors and, in many cases, no family history of multiple myeloma.

The emerging genomewide picture of multiple myeloma reveals genes never before associated with cancer as well as multiple genetic mutations that disrupt just a handful of common pathways, or chains of chemical reactions that trigger a change in a cell. Individually, each of these mutations is fairly uncommon and might have remained undiscovered had the researchers not looked at such a large collection of samples.

“Already, we can see that mutations are funneling into a limited number of pathways,” said co-senior author Todd Golub, director of the Broad’s Cancer Program and Charles A. Dana Investigator in Human Cancer Genetics at the Dana-Farber Cancer Institute. “This is a demonstration of the value of looking at more than just a single tumor in great depth.”

Never before have scientists taken an in-depth look at so many multiple myeloma samples. Over the past six years, next-generation sequencing technologies — machines that can sequence DNA at a rapid pace and deliver massive amounts of data in a short period of time — have surged. Sequencing the full genome of a tumor is still a feat of technical and analytical prowess and only a few studies to date have looked across more than one. The team of researchers studied 38 multiple myeloma patients, comparing the patients’ normal genomes to the genomes from their malignant cells.

With the whole cancer genome in view, one of the most challenging aspects of multiple myeloma research now is separating so-called driving events — the important mistakes that drive cells toward becoming cancerous — from passenger mutations, genetic alterations that are merely along for the ride. A team of researchers led by co-senior author Gad Getz, director of Cancer Genome Analysis at the Broad Institute, has developed computational tools to address this.

“Next-generation sequencing has the great potential and promise to allow us to comprehensively analyze the cancer genome at extremely high resolution and see all of the events that happen in cancer,” said Getz. “These tools that we’ve developed are state of the art — we’ve been able to dramatically decrease the error rate for detecting all types of mutations. Now, we can find those genes whose mutations occur more than expected by chance.”

Additionally, the study has brought to light new mutations affecting genes that had never previously been tied to cancer. “These genes, which are frequently mutated, were not on anyone’s radar before when thinking about multiple myeloma specifically or cancer in general,” said Golub, who is also an investigator at Howard Hughes Medical Institute and a professor of pediatrics at Harvard Medical School. “This shows that there are entirely new cancer-causing genes that are going to be discovered through these sequencing efforts.”

In half of the study’s patients, the researchers found mutations in genes that control two fundamental cellular processes: how RNA is processed and how proteins are folded. Two of these genes, DIS3 and FAM46C, appear to play important roles in the stability of RNA and hence its translation into protein. Researchers also found genes involved in blood clotting mutated in multiple myeloma patients, a new and surprising discovery. Follow-up studies will be needed to understand what role these defective genes play in cancer and how they can inform treatment.

“It’s going to take a lot of biological research to sort out whether these will make good drug targets,” said Golub, “but this is an example of how genetic analysis can help point the field in the right direction very dramatically.”

One finding with more immediate clinical importance is the discovery of BRAF mutations in a small number of multiple myeloma patients. BRAF mutations have “never been a part of the multiple myeloma lexicon before,” according to Golub, but have been previously seen in other forms of cancer, including melanoma and colon cancer. Drugs are now in clinical development to target this particular gene and have shown promising early results in patients with melanoma.

Golub pointed out that with more samples and the analytical tools to look genomewide, a new picture of the multiple myeloma genome is beginning to develop, and with it, new genetic insights. “This study shows that there really are entirely new cancer-causing genes that are going to be discovered through these efforts,” he said.