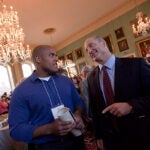 Harvard University announced on Thursday (March 3) that it will formally welcome the Naval Reserve Officers Training Corps (NROTC) program back to campus, following the decision by Congress in December to repeal the “Don’t Ask, Don’t Tell” law regarding military service.

“Our renewed relationship affirms the vital role that the members of our Armed Forces play in serving the nation and securing our freedoms, while also affirming inclusion and opportunity as powerful American ideals,” Faust said. “It broadens the pathways for students to participate in an honorable and admirable calling and in so doing advances our commitment to both learning and service.”

Under the agreement, Harvard will resume full and formal recognition of Naval ROTC on the effective date of the repeal of the law that disqualified openly gay men and lesbians from military service, anticipated to come in the summer of 2011.

As a part of the agreement, Harvard will appoint a director of Naval ROTC at Harvard and will resume direct financial responsibility for the costs of its students’ participation in the program. The University also will provide Naval ROTC with office space and with access to classrooms and athletic fields for participating students. Harvard Navy and Marine Corps-option midshipmen will continue to participate in Naval ROTC through the highly regarded consortium unit hosted nearby at the Massachusetts Institute of Technology (MIT), consistent with the Department of the Navy’s determination that maintaining the consortium is best for the efficiency and effectiveness of the “Old Ironsides Battalion.”

“Harvard has a long and proud tradition of service to the nation,” said Robert D. Reischauer ’63, senior fellow of the  Harvard Corporation. “Today’s agreement extends that tradition in ways that will strengthen the important bond between educational opportunity and devotion to the common good.”

Harvard also has begun pursuing discussions about renewing formal ties with ROTC programs associated with other branches of the Armed Forces.

In addition to signing the agreement with the Navy, Faust announced the formation of an ROTC implementation committee, to be chaired by Kevin Kit Parker, Thomas D. Cabot Associate Professor in Applied Science in the School of Engineering and Applied Sciences, as well as an Army major who has served three tours in Afghanistan.

The committee, whose work is expected to span not only issues concerning Naval ROTC but eventually other service branches as well, will explore ways to enhance the experience of Harvard ROTC students consistent with the broad framework outlined in the new agreement.

Harvard has a long affiliation with the military. It was one of the six original partner institutions of Naval ROTC in 1926. While ROTC has not had a formal presence on campus since the height of the Vietnam War, Harvard students have continued to participate in ROTC through the consortium based at MIT. Currently, there are 20 Harvard students participating in ROTC, including 10 in Naval ROTC.

The agreement was signed at historic Loeb House. During World War II, the Harvard president’s house at 17 Quincy St., now known as Loeb House, was turned over by President James Bryant Conant to the Navy for its V-12 training program, which supplemented the force of commissioned officers in the service. During that period, the house was operated with the same rigor as a naval vessel, with a 24-hour watch and with sailors scrubbing the oak floors and polishing the “brightwork” of the mirrors located throughout the facility.