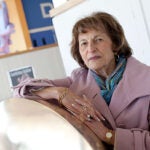 Dr. Harry Z. Mellins was born in 1921, grew up in the borough of Brooklyn in New York City, attended Erasmus Hall High School and graduated from Columbia College in 1941. From 1941 to 1944 he attended the Long Island College of Medicine (which merged with the State University of New York, eventually forming SUNY Downstate Medical Center).  In May of 1942, he was commissioned into the Army as a 2nd Lieutenant while continuing his medical studies. In 1944 he was Honorably Discharged although he immediately re-enlisted into the Reserves.  The discharge letter indicates he suffered from “compound myopic astigmatism” and was “granted a waiver for defective vision …”, ironic for an expert radiologist with an excellent “eye” for radiographic detail. At the Jewish Hospital in Brooklyn, he completed his internship from 1944 to 1945, and served as Assistant Resident in Radiology from 1945 to 1946.  In April of 1946, he was commanded, via Western Union telegram, to proceed as a 1st Lieutenant to Keesler Field Air Force Base in Biloxi, Mississippi. While there, he was offered a position to continue his residency training under the renowned radiologist, Dr. Leo Rigler, at the University of Minnesota. Unfortunately, delays in the Air Force caused him to miss his slot.  Only after the intervention of his Senator in Washington, D.C., was Dr. Mellins finally Honorably Discharged again (he had attained the rank of Captain) and able to complete his residency (1948-1950).  He received his MS in Radiology in 1951 and was appointed Instructor and later Assistant Professor in Radiology at the University of Minnesota.

Dr. Mellins was recruited to the position of chief of radiology at Sinai Hospital in Detroit (MI). In 1956, he was appointed Chairman of radiology at his alma mater; SUNY Downstate Medical Center where he worked tirelessly and further solidified his reputation as a skilled teacher, clinician and scholar.  Dr. Herbert L Abrams recruited Dr. Mellins in 1969 to be chief of diagnostic radiology and residency program director at the Peter Bent Brigham Hospital (now the Brigham and Women’s Hospital) in Boston, MA, positions he held for 30 years. During his tenure in Boston, Dr. Mellins worked with Dr. Abrams to restructure the department along subspecialty lines and contributed dramatically to the expansion and high quality of the radiology residency program.

Dr. Mellins was an expert radiologist with a clinical and academic focus in uroradiology. He was a founding member and former President of the Society of Uroradiology. He held numerous positions of honor locally and nationally and received many awards, including gold medals from the Society of Uroradiology, the American Roentgen Ray Society and the Association of University Radiologists.

Dr. Mellins was totally committed to radiology, his patients, his residents and his students. In a classic essay he described the Diagnostic Radiologist this way: “…But shadows, after all, are real. What are we to one another and what is the world to any of us but an inverted image on the retina?  Seeing is done with the mind.  The camera does not see: it records.  The radiologist perceives a shadow, sees a lesion, and imagines the man. The bedside physician sees the man perceives the signs, and imagines the lesion.  They practice from the outside in and we from the inside out.  Both are clinicians for in truth there is no other kind of doctor worthy of the name. The decisive test for all is finally and always bedside. This then is one concept of the radiologist – with a film on the view box but the bedside on his mind.”

Dr. Mellins was the epitome of the clinician/scholar.  By his repeated refrain to his trainees and colleagues “mine the material,” Dr. Mellins meant that for the academic radiologist, interpreting the images and rendering a diagnosis was only the first step. Then came the analysis of why the images looked the way they did, how a particular patient’s findings fit among others with similar appearances, how the diagnosis could be made with more precision and less radiation, and finally, how the results should be published so that others could learn from the experience.  In one of his last letters to one of us, he wrote “…we were all fortunate to be at The Brigham…where we had the opportunity to develop the material, and with it our own ideas.”

Dr. Mellins was an admired man and role model. He taught generations of radiology residents and innumerable other trainees and colleagues through lectures and conferences. Dr. Mellins felt strongly about the value of imaging as a vehicle for teaching gross anatomy and he spearheaded the inclusion of radiologic anatomy into the gross anatomy curriculum at Harvard Medical School. He personally oversaw the education of each resident entrusted to his care. He set the example for honesty, integrity, and professionalism (long before it became a “core competency”). He helped scores of medical students, residents, and fellows choose their professional paths and he facilitated their careers.

The authors of this memoriam, all residents or junior colleagues of Dr. Mellins, speak for virtually all his trainees over so many years when we say that Dr. Harry Mellins was, beyond all his professional accomplishments, an incredibly special mentor and friend. He had an immensely positive effect on each of our professional and personal lives.  We are better people, teachers, mentors and clinicians because of him. And we, like so many of his students, will strive to continue his legacy of excellence, integrity and intellectual curiosity.

He is survived by his wife, Judy; daughter, Elizabeth; sons, William and Thomas; grandchildren, Lisa, Jeffrey, and Samuel; and his brother, Robert.