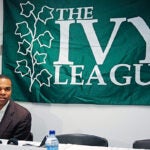 No quit in Crimson

Sophomore defenseman Danny Biega of the Harvard men’s hockey team has been named to the ECAC Hockey all-league second team, the league announced on March 16.

For the full story.