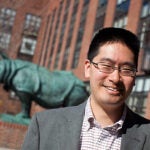 Experts bicker: How much vitamin D?

In a webcast this week (March 29), researchers used a recent federal report to start a conversation on vitamin D. How much is enough, and how much is too much?

The hour-long panel was sponsored by The Forum at Harvard School of Public Health (HSPH) and moderated by Reuters Health executive editor Ivan Oransky. It is part of the Andelot Series on Current Science Controversies.

Vitamin D dosage certainly counts as a controversial subject — and the four panelists were divided evenly.

On one side of the issue is a long-awaited report by the Institute of Medicine (IOM) on new “dietary reference intake” recommendations for both vitamin D and calcium, which are nutrients associated with bone health. The report maintained that most residents of North America need no more than 600 international units (IU) of vitamin D a day (800 for those over age 70) — and that most are already getting what they need.

On the other side of the controversy is a group of researchers, including some at Harvard, who recommend vitamin D supplements of 1,000 to 2,000 international units a day for adults — and say that daily doses of even 10,000 IU are safe.

Vitamin D is not found widely in foods, with the exception of fortified grains and fatty fish. Exposure to sunshine stimulates the body’s own production of the nutrient. But even so, some researchers say, as many as half the world’s people have inadequate blood levels of vitamin D.

These critics also maintain that the IOM report is based solely on bone health — and fails to acknowledge vitamin D’s broader role in good health. Some studies show that adequate vitamin D lowers the risk of nonskeletal diseases (including some cancers), depression, cognitive decline, osteoporosis, pregnancy complications, multiple sclerosis, heart disease, and even the seasonal flu.

Studies on these nonskeletal outcomes were taken into account, said JoAnn Manson, Elizabeth F. Brigham Professor of Women’s Health at Harvard Medical School, one of the IOM report’s 14 committee members. But in the end they were regarded as “inconsistent and nonconclusive,” she said. (Manson is also chief of the Division of Preventive Medicine and co-director of the Mary Horrigan Connors Center for Women’s Health and Gender Biology at Brigham and Women’s Hospital.)

The federal report said more trials are needed to shed light on the possibility of a wider range of benefits. Critics counter that — for now — epidemiological evidence is enough, and that public health officials should have recommended higher vitamin D levels.

But what is an adequate level of vitamin D? It’s a key question.

The IOM report declared that blood levels of 20 nanograms per milliliter will maintain good bone health. (More than 97 percent of North Americans achieve that level.) Critics prefer a higher standard —  30 nanograms — for this minimum level of sufficiency.

“People would be better off with a higher blood level,” said panelist Walter Willett, chair of the Department of Nutrition at HSPH and the Fredrick John Stare Professor of Epidemiology and Nutrition.

Willett has been a prominent national critic of the IOM report, calling its recommendations of vitamin D too low and for calcium too high.

But vitamin D blood levels of 30 or more are not reliably safe, said panelist Patsy Brannon, and would be inappropriate for a broad public health recommendation. She is a Cornell University nutritionist and IOM committee member who joined the conversation on a video uplink.

Panelist Bess Dawson-Hughes, director of the Bone Metabolism Laboratory at Tufts University, praised the IOM report for “many strong features,” but countered that 20 percent of North Americans still have insufficient vitamin D at the 20 nanogram blood level — and that the insufficiency spikes to 70 percent at 30 nanograms.

Many people are already at greater risk from vitamin D deficiency, said Dawson-Hughes, a past president of the National Osteoporosis Foundation. Those at high risk include the obese, those with very dark skin, individuals on medication for seizure disorders, and people with osteoporosis.

But in the end, both sides of the controversy see a way to settle things. The IOM report lays out public health recommendations, said Manson, and those recommendations “do not preclude clinical decision-making.” That is, case-by-case decisions about vitamin D will be at the doctor-patient level.