Do ask, do tell 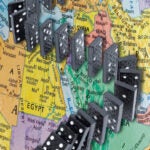 “What are you doing tomorrow?” asked a desperate friend on the other end of the line. “I need you to go to Portland, Maine, and introduce Lady Gaga for me.”

Young, unfamiliar with the edgy pop sensation, declined. But when her friend called back the next day in a panic, Young’s deep-rooted military sense of duty kicked in, and she agreed.

The doctoral candidate at the Harvard Graduate School of Education made the two-hour trip north from Cambridge to offer opening remarks at a rally with the singer organized by the Servicemembers Legal Defense Network. The event supported the repeal of  “Don’t Ask, Don’t Tell,” the longtime ban on gay men and lesbians openly serving in the military.

Young is painfully familiar with the toll the restrictive policy could take. A 16-year military veteran and helicopter pilot, the newly promoted lieutenant colonel was kicked out of the Army in 2002, just after her 40th birthday, for admitting she was gay.

“I knew what the risk was, but I felt that my sexuality was so irrelevant compared to the privilege to serve,” said the Florida native who wears her gold pilot’s wings on a chain around her neck. “It was a risk that I was willing to take every day.”

During her military career, Young spent three years as an instructor at the U.S. Military Academy at West Point. She had just been selected for a full-time position there when she was discharged.

Armed with her Harvard degree, she intends to head back to West Point, her alma mater, to teach, either in civilian clothes, or now, with the implementation of the Don’t Ask, Don’t Tell Repeal Act of 2010, quite possibly back in uniform.

“I really loved teaching cadets and being a part of influencing those formative years.”

Reeling from losing the only profession she had known, Young said she finally pulled herself “up off the floor” and joined the ranks of corporate America. She took a job with the military contractor Raytheon, selling air traffic control systems in the Middle East, but she was miserable. Recalling her love of teaching, she phoned a friend at West Point to inquire about returning to teach as a civilian instructor.

In 2007 she enrolled at Harvard to pursue her doctorate and get started on her path back to West Point. Her dissertation will focus on how stereotyping and prejudice manifest in group dynamics.

“Being at Harvard is like being back in a place I belong,” said Young, who praised her colleagues and fellow students for “being so generous with their intellect.”

“I was equal parts elated, and equal parts nonplussed,” she recalled on hearing the policy would be thrown out. “I was really relieved for soldiers now who needed it, and I was also hurt, because I had this horrible feeling that it was too late for me, that I wouldn’t be able to serve again.” She is eagerly waiting to see if she will be able to re-enlist.

As the armed services work out the administrative details of the new policy, Young fears that a heart operation she had in 2009 to correct a faulty valve, her age, and other factors may prevent her returning to the service.

But if offered the chance to re-enlist, she would jump at it.

“I wouldn’t care if they sent me to some hole in the desert somewhere. I’d love to serve again.”

If she returns to the military, Young could serve and be reselected to teach at West Point as an officer. If not, she could also return to teach as a civilian.

“Somehow,” she said, “I am going to end up back there teaching.”