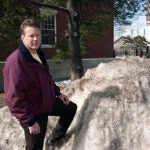 Taube Weiner has had no problems making the most of retirement. From learning Hebrew and celebrating an adult bat mitzvah to picking up consulting work as a career counselor, Weiner has embraced her newfound freedom since retiring from Harvard in 2009 at 74.

But that doesn’t mean she didn’t hit a few bumps along the way.

“You think you’re prepared,” Weiner said. “Then the roof falls in, so to speak.” For Weiner, that unexpected avalanche came in the form of a flooded home and $4,000 worth of dental work, a cost that could have been avoided had she signed up for the retiree dental plan that the University offers.

Weiner was hardly alone in navigating the uncertain path to retirement. Last year, 121 Harvard employees with at least 10 years of service retired, and hundreds more at the University are heading down the same road. But experts have found not many of them are putting in the long-term planning required for a stable financial future.

According to a study of people age 50 to 70 released last month by Miami University and the MetLife Mature Market Institute, working Americans in that age bracket spent just 15 hours over the past six months planning for retirement. Only a fifth of those surveyed felt very confident they could provide for themselves or a spouse past the age of 85.

With those numbers in mind, the Harvard Benefits Office is resurrecting its popular financial planning seminar, “Transitioning to Retirement: A Pre-Retirement Planning Program.” The first four sessions, the first of which is March 31, have filled up already, and registration for additional sessions for the fall will be available soon, said Melanie Aska, the seminar’s coordinator. (Dates and registration information can be found online.)

“We want to demystify the benefits of retirement,” said Aska, senior consultant for benefits education and communications. “We’re trying to take away some of the anxiety people may feel when they transition from an active work life, with a paycheck and benefits.”

Weiner was relatively well prepared for the financial realities of retirement. Her job at Harvard Medical School as a career consultant at the Center for Workplace Learning and Performance entailed giving other employees advice on that very topic. But after leaving the University, she said, she found it hard to stick to a budget.

“At first, I found myself running around and spending money, looking for things to do,” said Weiner, who good-naturedly describes herself as lacking a “financial head.” “I was having a wonderful time, but I had to sit back and say, ‘Wait a minute, the money’s going out, but it’s not coming in.’ ”

The pre-retirement seminar, which is open to employees who are one to five years from retirement as well as their spouses and partners, aims to lay out the various ways the money does still “come in” and help participants make the most of those often-confusing funds. The daylong sessions will cover Harvard-sponsored retirement and health benefits, estate planning, long-term care insurance, Social Security, Medicare, and investing for retirement. Representatives from financial services companies (TIAA-CREF, Fidelity, or Vanguard), the Social Security Administration, the Harvard University Retirees Association (HURA), and the Harvard University Employee Credit Union will be on hand to present and answer questions.

The session will fill a need for information in the retiree community, said Malcolm Hamilton, president of HURA, which has 1,200 members out of roughly 3,200 living retirees.

“People have been asking us questions that should have been answered before they retired,” he said. By the time an employee has retired, he added, some answers may not be of much use. “If you discover a few years before you retire that you haven’t been too smart about your retirement funds, then that’s too late.”

In the years since the recession began, people have been more cautious about their decision to retire, Hamilton said, which could contribute to high interest in the planning seminars.

“There’s a mythology that no one can afford to retire anymore, and that’s just not true,” Hamilton said. “But a little fear and trembling isn’t a bad thing. People ought to think about what their needs are going to be, because they are living longer and they’re living healthier.”

But as any recent retiree will tell you, financial planning for retirement is just the beginning. The hard part is figuring out what to do after the morning commutes and busy workweeks disappear.

With that in mind, Harvard’s Center for Workplace Development is piloting a five-week discussion group for employees nearing retirement called “Changing Lanes” that will explore ways to make the most of one’s retired years, from part-time work to volunteer opportunities to travel and leisure time. The program will only be open to those who have completed the financial planning workshop.

“Once people get their financial ducks in order, they’ll be ready to focus on the lifestyle issues,” Aska said.