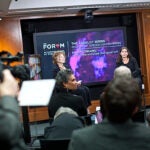 The debate over mammograms

Harvard biologist driven by mysteries of the sea

The deep sea is less well known than the surface of the moon, about as hard to get to, and as dangerous once you’re there. It holds the world’s longest mountain range — the mid-ocean ridge — carries in its waters enough gold to give every human on the planet nine pounds and, below 1,000 meters, is still vast enough to constitute 80 percent of Earth’s biosphere.

It’s also the site of one of the last century’s most startling scientific discoveries: whole communities of animals fueled not by photosynthesis and sunlight, but by chemical energy drawn from enormous smoking vents fired by the Earth’s volcanism. It is also a place that scientists such as Harvard’s Peter Girguis want to get to know better, with new networks of sensors and a refit of the venerable Alvin submersible under way.

Girguis, the Loeb Associate Professor of the Natural Sciences, presented a history of undersea exploration and an overview of his deep-sea work on Wednesday (March 9) during a talk at the Harvard Museum of Natural History.

In his introduction, Agassiz Professor of Biological Oceanography James McCarthy said that Girguis is just the latest in a long line of Harvard faculty members who have explored the ocean depths. It was Louis Agassiz, founder of the Museum of Comparative Zoology (MCZ), who conducted the first dredges of the ocean floor of the western North Atlantic, and his son, and MCZ director, Alexander Agassiz, who introduced wire cable that allowed even deeper dredges, conducted over 100,000 miles of cruises.

In his talk, Girguis traced the rise of modern oceanography to the voyage of the Challenger in the 1870s. The sailing ship had just six scientists among its 200 crew members and 21 officers, and endured many hardships during its four-year, 69,000-mile voyage. Along the way, scientists netted fish, dredged the ocean floor, took depth and temperature readings, took water samples, and analyzed the gases dissolved in ocean water. They also discovered more than 4,700 new species and found life as deep as 8,000 meters.

Modern scientists owe much to those original Challenger investigators, and many of the instruments used today are similar to those pioneered aboard that ship, Girguis said. Despite the revelations of Challenger scientists and other early explorers, however, it is difficult for scientists to truly understand marine creatures by dredging them up or netting them at sea and dumping them onto the deck of a ship. What’s missing, Girguis said, is critical context about habitat and behavior that comes from observing creatures in their natural habitat.

The problem for marine scientists, however, is that the habitat is hostile to humans — airless and pitch black, with crushing temperatures. Two men in the 1930s took a major step in solving that problem, constructing the bathysphere of steel one and a quarter-inch thick. Squeezing through a tiny door and peering out an equally tiny window, the two dangled a half mile below the surface, suspended from a steel cable with just a phone line to the surface for communication, and observed the deep ocean for the first time.

The bathysphere began a revolution in deep ocean science, Girguis said. In the early 1960s deep submersibles were built, including the now-iconic Alvin, which has just been dry-docked for a major overhaul and which has been so productive over its decades in service that it has carried 12,000 people to view the depths of the sea firsthand.

It was Alvin that, in 1977, discovered what Girguis termed one of the most significant scientific discoveries of the 20th century: the discovery of biological communities around ocean floor volcanic vents. Their significance stems not just from their surprising existence, but also that they are built on an entirely different foundation — on chemical energy from volcanic vents, rather than the sun’s energy harnessed by photosynthesis.

Today 200 vent fields have been discovered in oceans around the world that on first blush shouldn’t be places for life to thrive. Water temperatures range from 4 degrees Celsius to 350 degrees Celsius, hot enough to burn wood even under water. The vent water itself is corrosive as well as hot, containing high quantities of hydrogen sulfide. It melts, burns, or corrodes plastic, wood, glass, tin, and most other metals. And all this happens in an environment far enough from the surface that no light penetrates, and under pressure high enough to crumple steel.

These biological communities have astounded scientists not just with their strangeness — such as giant tube worms that, because they get nourishment from symbiotic, chemical-driven bacteria, have no mouths or guts — but with their profusion. (Biomass around some of the vents, Girguis said, rivals that of tropical rainforests.) And, among their populations are some of the most extreme living things on Earth, such as bacteria that can live and grow at nearly 250 degrees Fahrenheit.

Girguis detailed some of his own work on the sea floor, including a near-mishap on his first dive in Alvin in 1994 that saw him approach the sub’s deepest dive limit of 4,000 meters. He also described his explorations using robotic submersibles that drill into the vent stacks to find out at what temperatures extreme bacteria can live.

He also described the new frontier of undersea research, a cabled network of sea floor monitoring stations, funded by Congress and planned for the ocean bed off the Pacific Northwest and other locations, which will allow scientists to understand the conditions across a broad section of ocean over an extended period of time. The data from these stations would be available not only to scientists around the world but also to citizen-scientists who could make their own contributions, as they do in fields such as ornithology, Girguis said.