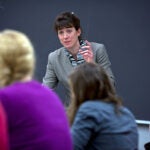 U.S. investigating ways to conserve fuel in the field

The average U.S. soldier on a 72-hour patrol carries between 10 and 20 pounds of batteries.

There are seven kinds of batteries that power flashlights, GPS devices, night-vision gear, and other equipment considered essential for the modern soldier. Including spares, a soldier lugs 70 batteries, along with the devices themselves, weapons, food, water, and other necessities.

All together, the modern soldier is carrying so much weight that it can interfere with his mobility and lead to injuries.

“We’re seeing pack weights of 130 pounds these days,” said Sharon Burke, assistant secretary of defense for operational energy plans and programs. “You can’t carry 130 pounds without turning up with injuries.”

The soldiers’ battery burden is just the tip of the military’s energy problem, Burke said. Heavily armored vehicles get just 4 miles per gallon. Air conditioners, computers, and other equipment at forward operating bases are powered by inefficient generators, at an enormous cost in fuel, requiring constant resupply. Delivering the fuel to where it is needed requires soldiers to protect the ferrying convoys, and costs both money and lives.

The Defense Department is waking up to the enormous burden placed on it by its energy use, Burke said, and is beginning to search for ways to release the military from “the tether of fuel.”

Burke, who was sworn in to her job last June, spoke at the Science Center Wednesday (March 2) as part of the Harvard University Center for the Environment’s (HUCE) Future of Energy lecture series. She was introduced by HUCE Director Dan Schrag, Sturgis Hooper Professor of Geology and professor of environmental science and engineering. Schrag said Burke is the first to hold her position and has been charged with re-examining how the military uses energy from top to bottom.

Her post was created as the realization dawned that the military’s thirst for fuel presented both logistical and budgetary problems. A spike in oil prices exacts an enormous cost for the military, which is the largest institutional user of oil in the nation, and probably the world, Burke said. The U.S. military accounts for 1 percent of the nation’s energy consumption, which translates into a $13.7 billion fuel bill in fiscal 2010, when the military consumed 160 million barrels of oil. In 2008, when oil prices spiked, fuel cost $20 billion.

“My job is to transform the way the military uses energy,” Burke said.

The military accounts for 80 percent of federal energy use, and 75 percent of the military’s energy consumption goes for operational purposes. Though the official price of a gallon of fuel within the military is set at $3.03, Burke said that the actual cost of fuel delivered, depending on the difficulty transporting it and protection needs, can be as high as $50 a gallon.

To some extent, Burke said, the military can’t avoid using enormous amounts of energy. Its multiple missions demand operating aircraft carriers, maintaining 150,000 troops in Afghanistan and Iraq, fighting terrorists around the world, and providing relief to besieged places like earthquake-stricken Haiti. The military employs 3 million people in operations around the globe that are projected to cost more than $600 billion in fiscal 2012.

Because the Defense Department’s security mission is considered critical, it is under different constraints than a global business that might be able to cut operations to save money. These realities, coupled with the likelihood of increased energy competition globally as India and China continue to grow economically, have reinforced the push to develop energy-saving technology for the military.

As an example of the last goal, Burke told a story of tent usage in Iraq. One large tent used as a gymnasium required six generators to power the air conditioning, and even then the temperature was only lowered to 90 degrees. The problem, of course, was that a tent isn’t insulated well, so much of the cooling was lost to the desert.

“People were dying so we can vent our air conditioning to the desert,” Burke said.

Someone came up with the idea of spraying insulation on the tents, which had an immediate impact, causing three of the generators to cycle off so rapidly that the facility manager thought they had broken down.

In Afghanistan, a company of soldiers is testing energy-saving technology in a frontline situation, relying on solar panels on tents, solar-powered lights, and stand-alone solar panels to recharge batteries — together cutting the company’s generator fuel consumption from 20 to 2.5 gallons a day. That drop means fewer fuel convoys which, in that part of Afghanistan, are almost certain to be attacked.

With its size and influence, Burke said, the Defense Department’s energy-saving efforts have the potential to have a broader effect, crossing over to the civilian world.

“We have the chance to be a major driver and innovator of change,” Burke said.