‘Crisis in Japan: The Way Forward’ 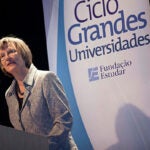 Spotlight on Harvard in Brazil

Like grief, like aging, like rocket launches, a disaster unfolds in stages. The earthquake, tsunami, and nuclear crisis that struck Japan March 11 may be entering another stage as the multiple effects ripple through the island nation’s economy, politics, and society.

These ripples and the exact nature of the next stage in what is now being called 3/11 were discussed Wednesday (March 23) by a panel of Harvard Japanese analysts and Japanese officials, including Takeshi Hikihara, the consul general of Japan in Boston.

Hikihara updated statistics that continue to worsen. As of March 22, there were 9,500 deaths, 16,000 people missing, 3,000 injured, and 260,000 evacuated. Low levels of radioactivity were seeping into produce and raw milk.

But Hikihara emphasized areas of improvement. “Emergency supplies are beginning to reach suffering people,” he said. “I am happy to say [that] as of yesterday all the power was connected to each of the six [nuclear] power plants.”

Only 12 days had passed since the initial earthquake, noted Susan Pharr, the Edwin O. Reischauer Professor of Japanese Politics. “We can start to think about some of the broader questions that all of this raises,” she said, “such as: What will it mean for the future of Japan? What will it mean for Japan’s leadership, including the Democratic Party of Japan, and [the] prime minister, and the future of Japanese democracy?”

Institutional changes are inevitable and have already begun, the panelists said.

“For the first time in Japanese history, Japanese military established a joint task force,” said Yoji Koda, a retired vice admiral of the Japan Maritime Self-Defense Force and now a senior fellow in the Harvard University Asia Center. A single commander has taken charge of all three of Japan’s services that are providing rescue operations, he said.

Japan’s economy may be overhauled, said Kotaro Tamura, a former elected official in the Japanese Diet and currently a research associate in the Program on U.S.-Japan Relations in the Weatherhead Center for International Affairs.

While the areas hit hardest by the disaster account for only 7 percent of Japan’s GDP, the rest of the country is suffering too, he said. Tokyo, for example, has lost 30 percent of its electricity, and people are not only conserving energy but are holding off on purchases. Toyota has slashed production; entertainment companies that have lost venues are declaring bankruptcy.

Citing the slogan “Disaster is a mother of reform,” Tamura outlined economic strategies that he believes should be considered. They include eliminating income taxes (as in Nevada, in which case gambling would have to be allowed); eliminating consumption taxes (as in New Hampshire); cutting corporate taxes; and creating favorable tax situations for the wealthy elderly to encourage them to stay.  He also urged the central government to give more discretionary power to local governments on taxation, regulation, and legislation.

“Although the damage caused by this extreme event is much, much bigger than I can explain, Japan will come back with huge and extensive reforms that will be very good for the future,” Tamura said.

Koda detailed the massive relief effort by the Japanese military and police and fire departments, showing slides of relief efforts amid scenes of devastation. “Since everything is gone, the only means to get to persons in the distressed area is by manpower,” he said.

His voice cracked while describing small miracles: the baby found amid the rubble; the man found at sea on the roof of his house.  More than 19,000 people have been rescued. “There’s hope,” he said. He showed a slide of people patiently waiting for water with “no struggle, no fight,” a sign of the Japanese power of patience.

Every possible measure is being taken to cool down the nuclear reactors damaged in the earthquake and tsunami, he said, describing progress as “two steps forward and 1.5 steps back.”

“It’s clear we’re entering a new stage in how this disaster is evolving in Japan,” said Michael Reich, the Taro Takemi Professor of International Health Policy.

In a disaster, Reich said, there is “the heroic stage of saving people, the stage where people are in shock, then moving into a stage of disillusionment as people get angry at what has happened to them, and a stage of reconstruction.”  Japan is now emerging from the first, emergency stage, he said.

“A disaster is an opportunity to regain a sense of national purpose. But this is going to require some visionary leadership,” he said. “The question is who is it today in Japan who can do this?”

To ensure that the historical record of the unfolding disaster is preserved, Andrew Gordon, the Lee and Juliet Folger Fund Professor of History, said Harvard has launched a digital archive project to preserve the Internet records of the event — such as Twitter feeds, web pages, and social media observations —  that might otherwise disappear.

“We’re part of something that’s going to have an important impact for many years,” Gordon said. “We need to be attentive to preserving the record of what’s happening.”

He requested that material be sent to daishinsai-archive@fas.harvard.edu.

The panel was sponsored by the Edwin O. Reischauer Institute of Japanese Studies, the Program on U.S.- Japan Relations, the Asia Center, and the Takemi Program in International Health.