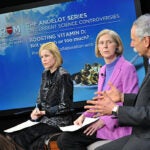 Harvard-affiliated researchers using two brain-imaging technologies have found that apparently normal older individuals with brain deposits of amyloid beta — the primary constituent of the plaques found in the brains of Alzheimer’s disease patients — also had changes in brain structure similar to those seen in Alzheimer’s patients. Results of the study, which has received early online publication in the Annals of Neurology, may help identify individuals who could be candidates for therapies to prevent the development of dementia.

“Our findings support the theory that Alzheimer’s disease begins many years before symptoms appear and that amyloid plaque is an early sign of this process,” says Keith Johnson of Massachusetts General Hospital (MGH) Imaging, senior author of the study. “We see that when amyloid deposits are present, even in cognitively normal individuals, the degenerative changes of Alzheimer’s are under way. Long-term studies to track these changes and observe how they evolve are ongoing.”

Definitive diagnosis of Alzheimer’s disease requires finding amyloid plaques and neurofibrillary tangles in the brain at autopsy. In recent years it has been possible to detect amyloid in living brains by PET scanning with an imaging agent known as Pittsburgh Compound B (PiB). Plaques have been observed in the brains of apparently healthy individuals, as well as those with dementia, but whether the presence of plaques indicates the early stages of Alzheimer’s disease is not yet known.

High-resolution magnetic resonance imaging studies have identified characteristic changes in brain structure — thinning of key cortical regions and reduced volume of structures such as the hippocampus — in persons with mild cognitive impairment, in individuals known to carry gene mutations that directly cause Alzheimer’s disease, and in diagnosed Alzheimer’s patients. A recent study reported similar brain changes in some cognitively normal elders but did not distinguish those who had amyloid deposits from those who did not.

The current study involved 87 cognitively normal older individuals and 32 patients diagnosed with mild Alzheimer’s — matched for age, gender, and education — who had enrolled in the long-term Harvard Aging Brain Study. Participants underwent both high-resolution MR imaging of brain structure and PET scanning with PiB to detect amyloid plaques. The results showed that those cognitively normal individuals who had amyloid plaques also had structural changes similar to but less pronounced than the neurodegenerative changes seen in the symptomatic patients. Structural changes were most evident in areas comprising what is called the default network, which is known to be affected early in the course of Alzheimer’s disease (AD).

“If amyloidosis — deposits of amyloid plaques — in the brains of clinically normal people is associated with Alzheimer’s-like neurodegeneration, then amyloidosis itself may signify ‘preclinical’ AD,” say Johnson, who is also an associate professor of radiology at Harvard Medical School. “We need to learn more about how long it takes a normal person with amyloid to develop AD, whether there are critical ‘second hit’ factors that convert amyloidosis to Alzheimer’s disease, and if there are measures that can halt the process of neurodegeneration.”

Alex Becker of MGH Imaging is lead author of the Annals of Neurology report. The study was supported by grants from the National Institutes of Health, Massachusetts Alzheimer’s Disease Research Center, Howard Hughes Medical Institute, the Alzheimer’s Association, and the Charles Farnsworth Trust.