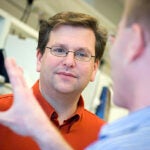 Although research has shown that eating fish, which is rich in beneficial omega-3 fatty acids, is associated with lower risk of cardiovascular diseases, mixed evidence from prior studies has suggested that mercury exposure from fish consumption may be linked to higher risk of cardiovascular diseases. In a new, large-scale study from Harvard School of Public Health (HSPH) and Brigham and Women’s Hospital (BWH), researchers found no evidence that higher levels of mercury exposure were associated with higher risk of coronary heart disease, stroke, or total cardiovascular disease in two separate studies of U.S. adults. The research appears in the March 24 issue of the New England Journal of Medicine.

“Prior studies have been relatively small and [have] shown mixed results. This large analysis from two separate studies provides the most robust evidence to date on whether mercury exposure affects cardiovascular disease,” said lead author Dariush Mozaffarian, associate professor in the Department of Epidemiology at HSPH and Division of Cardiovascular Medicine, BWH, and Harvard Medical School.

The researchers analyzed data from two studies including 51,529 men in the Health Professionals Follow-Up Study (HPFS) and 121,700 women in the BWH-based Nurses’ Health Study (NHS). Participants in both groups have answered questions every two years (HPFS beginning in 1986, NHS in 1976) about their medical history, risk factors, disease incidence, and lifestyle.

For this study, the researchers measured mercury concentrations in stored toenail clippings in nearly 7,000 participants who did and did not experience a cardiovascular event during follow-up. Toenail mercury concentrations are an excellent biomarker of long-term mercury exposure. The researchers identified 3,427 new cases of coronary heart disease and stroke and matched them to 3,427 randomly chosen participants free of cardiovascular disease during follow-up.

After adjusting for age, gender, and other cardiovascular disease risk factors, the researchers found no association between mercury exposure and higher risk of cardiovascular disease. Trends toward lower risk with higher mercury levels were actually seen, which the researchers attribute to other beneficial effects of fish consumption. Also, there was no evidence of adverse effects whether participants consumed low or high amounts of fish or had low or high toenail levels of selenium (a trace nutrient that has been proposed to protect against mercury toxicity). Mercury levels were also not associated with higher cardiovascular risk even after adjusting for self-reported fish or omega-3 fatty acid consumption.

“These findings suggest that people need not worry about cardiovascular harm from mercury exposure when deciding whether or not to consume fish,” said Mozaffarian. “Public health efforts to reduce mercury in the environment should continue, as mercury exposure can have other harmful effects, for example on neurodevelopment during infancy.”

The authors also note that this research should not change advisories for women who are or may become pregnant to avoid eating certain species of fish with higher mercury levels, given the potential for adverse effects of mercury exposure on neurodevelopment in their children.

“Our results strongly support the recently released 2010 U.S. Dietary Guidelines, which conclude that ‘health benefits from consuming a variety of seafood in the amounts recommended outweigh the health risks associated with methyl mercury’ and that most Americans should ‘increase the amount and variety of seafood consumed by choosing seafood in place of some meat and poultry,’” said senior author Eric Rimm, associate professor in the Departments of Epidemiology and Nutrition at HSPH.