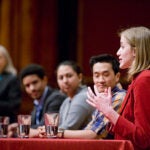 In one classroom at the Gardner Pilot Academy, first-graders and their parents played Blink, an Uno-like game that teaches counting and shapes. Down the hall, fifth-graders worked through a word problem involving fractions — the sort of question that might appear on the MCAS exam — by plotting out the problem with colored fraction blocks.

In another room, fourth-graders challenged their moms and dads to a game of Go Fish adapted to time telling, where players must collect matching times on both digital and analog clocks. “I keep on beating my mom!” one girl shrieked. “I think she needs to go back to math class.”

The North Allston elementary school’s first Math Night, held Feb. 16, brought parents into the school for an Italian dinner and a chance to learn fun ways to practice math with their children. But the evening, sponsored by the Harvard Achievement Support Initiative (HASI), also provided the school’s families with insight into the up-to-date learning tools that Harvard works with the academy to provide. Each family went home with a HASI-approved gift bag of math skill sheets and games in Spanish and English.

“These games mirror the national educational standards,” said Lisa Moellman, an assistant co-director at HASI. “We’ve provided $3,500 worth of learning materials for the … after-school program, and we’re in the process of moving math fluency games into the regular school day.”

Math Night was the latest of Harvard’s many collaborative efforts with the school, a fact driven home by last month’s announcement that the academy will receive a $24,920 grant from the Harvard Allston Partnership Fund for the second year in a row. One of eight awards given to Allston-Brighton nonprofits, the money will fund the academy’s extended-learning programs, from adult education to summer enrichment to the after-school program.

“Harvard has a longstanding, mutually rewarding partnership’’ with the academy. “Our partnership flourishes through the ongoing efforts of Harvard students, faculty, museum educators, after-school experts, and staff,” said Christine Heenan, Harvard’s vice president of public affairs and communications. “Supporting the Gardner Pilot Academy is an extension of our mission and another important investment in the Allston-Brighton community and our shared future.”

As the only public elementary school in North Allston-Brighton, the academy has long been an important neighbor to Harvard. Home to a diverse mix of students, the school received its pilot status in 2006, making it a full-service school with programs open to the Allston-Brighton community. The broad array of programs the school now offers wouldn’t have been possible without the University’s support, said Lauren Fogarty, the academy’s director of extended services, who runs the after-school program.

“Harvard is such a tremendous partner in so many ways,” Fogarty said. “Whether it be financial support through Harvard Business School’s charity auction, or [HASI providing us] on-site resources, they’ve been a real resource to us.”

Some Harvard partnerships bring education research to bear on specific issues facing the school’s population. For instance, the HASI teaching tools that students received at Math Night, such as colored fraction blocks, are particularly helpful for the 70 percent of students at the academy who don’t speak English in the home.

“The research shows English-language learners’ best learning of a concept occurs if they’re able to hold it, touch, it, play with it in a group setting,” Fogarty said. By partnering with HASI and with the Harvard Allston Education Portal, where academy students make regular visits for hands-on activities, the school has been able to expand learning beyond the classroom.

The Ed Portal began partnering with the school in fall 2009 to create a customized science enrichment program for the academy’s fourth- and fifth-grade after-school students. Educators from the Harvard Life Sciences Outreach Program develop the curriculum and work with the Ed Portal’s Harvard undergraduate mentors to run science lessons, which have benefitted 25 students this year.

Those extra programs help draw parents such as Sean Andersson, the father of 5-year-old Ethan, a K-1 student. Andersson and his wife decided to enroll their son in the academy in part because of the rigorousness of its after-school program, which serves 130 of the school’s 350 students.

“We liked the fact that it wasn’t just day care,” he said.

Harvard’s involvement with the academy extends into the school day, too. Harvard Business School (HBS) students tutor at the school. The Harvard Art Museums developed special tours for the academy that tailor the museum experience to different grades, and in many cases the University provides transportation for such field trips.

In recent months, the student community at Harvard has connected with the school, with the help of Harvard Community Affairs. In December, more than 100 undergraduate volunteers hosted a field day carnival for academy students at Harvard’s Gordon Track, and in January, 16 students from the Institute of Politics took part in a project to fix up a reading room at the school.

Kathy Morancy, a third-grade teacher at the school, said students in her class have benefited “emotionally and academically” from an HBS-sponsored mentoring program and a pen pal program that pairs an HBS staff member with every student.

“A lot of our students need that one-on-one attention,” Morancy said. “It’s nice for them to be able to look up to role models, and to know that maybe one day they could go to Harvard.”

Krishan Vaidya, a fourth-grader, is one such student, according to his mother, Rita Vaidya, a member of the Ed Portal’s advisory board. Krishan is one of roughly a dozen academy students each semester who receive science, writing, and math mentoring at the Ed Portal. He has been working with a Harvard undergraduate mentor to improve his writing skills. The relationship provides more than just tutoring, Vaidya said.

“They relate well to each other,” she said. “They’ve had conversations about math, about calculus. They get along well, and that’s important.”

“Being around Harvard students is definitely very positive for him,” Vaidya added. “My son wants to go to Harvard. He’s shooting for the stars.”