A look inside: Dudley House Co-op 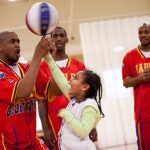 Before the Dudley Co-operative Society was founded in 1958 as alternative housing for Harvard undergraduates, it was a bed and breakfast where Teddy Roosevelt and Henry Cabot Lodge are reported to have slept.

Today, co-op resident and ethnomusicology concentrator Christopher Johnson-Roberson ’11 says life in the co-op, which houses 30 undergrads, two resident tutors, and a tutor’s spouse in its two buildings, supports his academic and social interests. “My academic work focuses on how music can be a means to promote social cohesion and also express political protest,” he said. “The jam sessions at the co-op represent a synthesis of all the components of the community that I appreciate.”

Residents do their own cooking and cleaning. Multiculturalism is reflected in the co-op’s cuisine during nightly communal meals. One evening, Iman James ’12 chopped fresh bunches of kale while Alice Gissinger ’11 dropped dabs of butter into a wok full of rutabaga for a special vegetarian menu: kale verde con rutabaga, curried couscous, salade de lentilles, and cheesecake.

When Gissinger was working intensively on her senior thesis recently, fellow co-op members helped care for her day-to-day needs according to a point system that is described in the co-op sutra, a book of house rules written and updated by previous residents and passed down each year.

“In the co-op, it’s not just my social life that’s provided for,” said Gissinger. “There is a feeling of reciprocity that encourages communication, respect, collaboration, and community.”

Opting for the Co-op