A champion of democracy 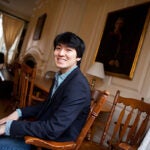 Finding a sense of place

The administration of Liberian President Ellen Johnson Sirleaf is part of a new wave of democratic governance washing through African nations, bringing an emphasis on economic reforms to get the nation back on track, faculty members said after Sirleaf was selected as this year’s principal speaker at Harvard’s 360th Commencement.

Nicholas Burns, the Sultan of Oman Professor of the Practice of International Relations at the Harvard Kennedy School and former U.S. undersecretary of state for political affairs, said that Liberia, South Africa, Botswana, and Mali have all embraced democracy in recent years. Sirleaf’s six-year term as president has been remarkable, he said, not only because of its break with the past dictatorships that ruled previously, but also because of the stability and hope it brought to the war-torn nation.

“She’s one of the modern generation of African leaders. She has rebuilt her country and given it new hope. Liberia was a broken country in many ways, divided by civil war, [experiencing] terrible human rights abuses under the previous regime of Charles Taylor,” Burns said.

Even a cursory glance at Liberia’s recent past shows the magnitude of the task undertaken by Sirleaf. A 1980 military coup ushered in 10 years of authoritarian rule by Samuel Doe. That was challenged in a 1989 rebellion led by Charles Taylor, resulting in a civil war that lasted until 1997, when Taylor was elected president. Fighting resumed in 2000, ending in 2003. Sirleaf was elected in 2005 after two years of rule by a transitional government and took office in 2006. Taylor is currently on trial at The Hague for war crimes allegedly committed during the civil war of neighboring Sierra Leone.

Adam Cohen, assistant professor of chemistry and chemical biology and of physics, has traveled to Liberia each of the past two summers, offering science teacher training to improve instruction in the subject in the nation’s devastated schools.

Though the war ended in 2003, Cohen said after his first trip in 2009, that the toll the conflict took remains apparent, with local schools stripped of metal and equipment, and with interrupted educational careers a problem for students and adults alike.

Cohen welcomed Sirleaf’s selection as Commencement speaker, saying that her administration, together with nongovernmental organizations and international donors, is working to get Liberia headed in the right direction.

“There is a concerted effort by people in the government of Liberia, in nongovernmental organizations, and [in] the international community to get Liberia back on track, with infrastructure, sanitation, and health care,” Cohen said. “There’s a heck of a long way to go.”

Despite the positive changes in Liberia, Cohen said some ordinary people remain wary, mindful of the broken political promises of the past.

“It varies by where you are and who you talk to,” Cohen said of people’s attitudes. “In the capital, it’s getting better. But there’s a certain amount of cynicism, which is understandable when you think of what they went through.”

History Professor Caroline Elkins, who also chairs the Harvard University Committee on African Studies, said she was thrilled by Sirleaf’s selection. Elkins said that Sirleaf not only has a successful democratic administration, but has transformed Liberia’s finances, an important fact about her tenure not often cited.

Trained as an economist, Sirleaf has reduced Liberia’s national debt with the help of forgiveness by international donors, and has set limits to how much the nation can borrow. In addition, Elkins said, her status as Africa’s first woman head of state makes her an important role model for young women.

“It think it’s important in two ways,” Elkins said. “She’s a democratically elected, incredibly effective, strong head of state, period. And she’s a woman. She’s the kind of role model that transcends race and ethnicity and even gender, because she is somebody who has taken on an incredibly challenging set of circumstances in a part of the world [that needs] more leaders like her.”

Elkins said Sirleaf’s selection is the latest indication of the importance that Harvard and President Drew Faust put on Africa and African studies, coming as it does on the heels of Faust’s 2009 trip to southern Africa and the University support that led to the Committee on African Studies being named a National Resource Center by the U.S. Department of Education.

Harvard Kennedy School Dean David Ellwood and Edward S. Mason Program Director Paulina Gonzalez-Pose said Sirleaf, who attended Harvard as a Mason Fellow and graduated in 1971 with a master’s degree in public administration, provides an inspirational example of hard work, perseverance, and service for the School’s students to follow.

“As the first female elected head of state on the African continent, President Sirleaf has worked tirelessly to improve economic and political conditions in Liberia, and to improve the lives of all people in her country,” Ellwood said. “We at the Kennedy School are very proud of her many accomplishments, and continue to support her efforts to bring about positive change in Liberia.”

Gonzalez-Pose said Sirleaf was active in Liberia’s struggles for many years, running against Taylor in the 1997 election and having to leave the country after his victory. It’s important, Gonzalez-Pose said, that the changes Sirleaf has made have been created democratically.

Sirleaf is just one of seven current heads of state to have attended Harvard’s Mason Program. Other alumni lead Mexico, Singapore, Hong Kong, Mongolia, Colombia, and the United Nations.

Sirleaf was the Kennedy School’s Commencement speaker in 2008 and also spoke at the School in 2006, just months after beginning her presidency. In her talk that night, she told of children’s amazed reaction at the bright lights when electricity was turned on in parts of the capital for the first time in 15 years.

“It is a symbol of our journey from darkness to illumination,” she said.