The map of us 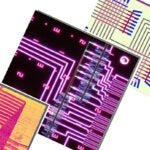 What ultra-tiny nanocircuits can do

10 years on, Sanders panel to explore the Human Genome Project

It has been described as “biology’s moonshot.” After 15 years of planning and work by public- and private-sector scientists at 20 centers in six countries, the Human Genome Project delivered what then-President Bill Clinton called “the most important, most wondrous map ever produced by humankind.”

What makes the Human Genome Map especially wondrous is its inward focus. It is the map of us, our portrait at the level of 21,000 genes.

To mark the 10th anniversary of the publication of that portrait, Harvard President Drew Faust will host a panel discussion on the project next week (Feb. 22) in Sanders Theatre.

The panel, featuring a leader of the original project, researchers who have benefited from the effort, and the head of the U.S. Food and Drug Administration, will consider the territory covered since the map was published in the scientific journals Nature and Science, and where researchers hope it will go in the future.

Because of the import of, and interest in, the Human Genome Project outcome and its long-range implications, USA Today, the nation’s largest-circulation newspaper, will be live-streaming the Sanders Theatre panel on its website beginning at 4 p.m. Tuesday. The video will also be available here.

While some observers have questioned whether the $3 billion project has contributed enough tangible benefits to humanity, many scientists say that its impact on genomic and medical research — indeed, on the very conduct of research — has been astounding.

“Today, we are learning at dizzying speed about the interplay of genes and environment in diabetes, heart disease, and other common conditions. In the past three years alone, more than 1,000 genetic risk factors have been found [an increase of perhaps 50-fold], contributing to more than 100 common diseases,” David M. Altshuler, a Harvard Medical School (HMS) professor of medicine and genetics, noted in a commentary in the latest issue of Tech Review. “Such advances would have come far later, if at all, without the Human Genome Project.”

When Altshuler was a student, he was taught “that the parts of the human genome not encoding proteins were ‘junk.’ Today, we know that this junk makes up three-quarters of our functional DNA. Parts of it help exquisitely control where and when genes are active in the body.

“I was taught,” he wrote, “that ‘genetic diseases,’ such as cystic fibrosis, are caused by mutation of a single gene, with only a small handful of these mutations known. Today, precise causes are known for 2,800 of these rare single-gene disorders.”

Altshuler and others have noted that the project also dramatically increased the sharing of scientific data across disciplines, touching off an exponential increase in cross-laboratory, cross-departmental and cross-institutional collaboration. “A body of knowledge is not its only legacy,” wrote Altshuler, who also is the director of the Program in Medical and Population Genetics at the Broad Institute of Harvard and MIT. “It changed the way biological research is performed.”

Writing on the “Initial Impact of the Sequencing of the Human Genome” in last week’s edition of Nature, Eric S. Lander, a leader of the project, president and director of the Broad, an HMS professor of systems biology, and a member of the panel, said that “the past decade has shown the power of genomic maps and catalogs for biomedical research. By providing a comprehensive scaffold, the human sequence made it possible for scientists to assemble often fragmentary information into landscapes of biological structure and function.”

But like the maps produced during the great age of global exploration from the 15th to mid-18th centuries — which proclaimed “here be dragons” in places that had yet to be fully explored — the information provided by the Human Genome Map contains many modern gaps that will only be filled as understanding of the project’s biological, social, and ethical ramifications grows.

The Sanders panel, which will take place at 4 p.m. on Feb. 22, will explore both what has been accomplished since the creation of the Human Genome Map and the ways in which science and society may replace the dragons with additional knowledge and policies. In addition to Lander, the panel will include:

The afternoon of Feb. 22 will be especially biology-rich at Harvard. In addition to the panel, C. David Allis, Joy and Jack Fishman Professor and head of the Laboratory of Chromatin Biology and Epigenetics at The Rockefeller University, will deliver a Dean’s Lecture at the Radcliffe Institute for Advanced Study on the related topic, “Beyond the Double Helix: Varying the ‘Histone Code.’ ”

Allis’ presentation, which will take place in the Radcliffe Gymnasium at 3 p.m., will explore the ways in which genes are turned on and off during development and the mechanisms involved in regulating those complex processes.