Shakira named Artist of the Year 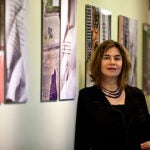 Renowned Colombian singer, songwriter, and philanthropist Shakira has been named the 2011 Artist of the Year by the Harvard Foundation. The Grammy Award-winning musician will be awarded the foundation’s most prestigious medal, which bears the signature of Harvard President Drew Faust, at the annual Cultural Rhythms award ceremony on Feb. 26.

“The students and faculty of the Harvard Foundation are honored to present multiplatinum artist Shakira with the 2011 Artist of the Year award,” said S. Allen Counter, director of the Harvard Foundation. “Her contributions to music and distinguished history of creativity have been applauded by people throughout the world, and she is greatly admired worldwide for her humanitarian efforts through her Barefoot Foundation.”

Shakira, born Shakira Isabel Mebarak Ripoll, began her impressive music career as a teenager and later became a dominant presence on Billboard’s Latin music charts with her best-selling album, “Dónde Están Los Ladrones?” The multiplatinum record earned her respect and fame in Latin America, but it was not until the release of her first English language album, “Laundry Service,” that she conquered the American pop charts as well. Since then, she has become an international superstar and has sold close to 50 million albums worldwide. In 2006, her hit song “Hips Don’t Lie” became a worldwide phenomenon, reaching the number one spot in 55 different countries and becoming the biggest selling single of the 21st century. In 2009, she performed for President Barack Obama at a concert celebrating his inauguration, and most recently her song “Waka Waka (This Time for Africa)” became the best-selling World Cup song ever released.

Shakira is also widely respected for her humanitarian work through the Barefoot Foundation, which aims to promote a better quality of life for children in impoverished areas by providing them with education and nutrition. Although Shakira was only 18 when she founded the foundation, her dedication to its message and its mission has continued to grow stronger through the years, and the foundation recently celebrated the opening of its sixth school.

“We shouldn’t think of this as charity. Every child has talent to be developed and the potential to become a productive member of society. Education is a powerful tool to unlock those talents — and to break the cycle of poverty that too often traps them,” said Shakira. Though based in Colombia, Barefoot Foundation is expanding its mission to other countries as well and has initiated projects in both South Africa and Haiti. Shakira’s commitment to education and to the needs of those suffering around the world has also been advanced through her humanitarian work as a UNICEF Goodwill Ambassador.