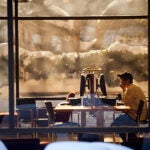 Most researchers will tell you that making a great scientist doesn’t require vast amounts of knowledge, but rather a keen interest in learning. Just ask Tomer Avidor-Reiss, an assistant professor of cell biology at Harvard who has been inviting area high school students to work in his lab for the past five years.

“The key for me is motivation,” Avidor-Reiss said, sitting in his office at Harvard Medical School (HMS) surrounded by blown-up photographs of the fruit fly cells he spends his days researching. “We can teach them, but they have to have motivation to learn. We bring students into the lab, show them the science, and they have no choice — they fall in love.”

Such is the goal of Project Success, a program operated by the Harvard Medical School Office for Diversity and Community Partnership that targets Boston and Cambridge high school students to participate in mentored summer research internships with researchers like Avidor-Reiss.

An intensive, hands-on experience for students who are interested in science and medicine, the program is intended to create a pipeline of students from underrepresented communities going into high-tech fields. The students meet with senior researchers at each lab, devise a project, and then are given guidance on how to proceed, developing a hypothesis and testing it through the course of the internship.

Since the program was launched in 1993, 99 percent of all Project Success graduates have been accepted at four-year colleges — including 10 percent who became Harvard undergraduates.

For Frederick Chim, participating in Project Success opened the door to a career in science. A native of Hong Kong, Chim moved to Brighton in 2004. A guidance counselor noticed his interest in science and encouraged him to apply to Project Success.

“Part of me thought, ‘Wow, this is amazing,’” Chim said of his acceptance into the program. “The other part thought, ‘Can I do this?’”

Chim landed in Avidor-Reiss’ lab, studying genetic mutations of fruit fly cells and conducting experiments to shed light on how these genes are formed in the hopes of discovering how brain diseases develop. Because Project Success enables students to return to the labs throughout their undergraduate career, Chim has been able to see the long-term results of his work.

“My friends who took science classes in school rarely saw the practical aspect,” he said of his days in high school. “For them, science was something you did for a grade. There was no incentive or connection to make science into a career. To work in a lab, to see science happen in front of you, is fascinating, fun, and inspiring.”

Similarly, Ronny DeLeon, of Roslindale, said he’s using his experience in Project Success to figure out who he is and what he wants to do with his life. A 17-year-old senior at TechBoston Academy in Dorchester, DeLeon knew he liked science, but wasn’t sure how to turn his interest into a career.

“Project Success is a tool for me to explore what I want to do,” he said. While his friends spent last summer enjoying their break, DeLeon spent it working in Brigham and Women’s Hospital‘s Visual Attention Lab.

“I was nervous at first,” he said. “The expectations are high in the lab. But everyone is friendly; I feel at home there.”

Students’ lab work is augmented by seminars and workshops given by faculty and administrators, site visits, and career guidance counseling. For DeLeon, those experiences have opened doors to career possibilities and life lessons. A visit to a neuroradiologist’s office piqued his interest in the field, while group exercises have given him a better sense of self.

“Every time we leave a session, we have to say five positive things about ourselves,” he said. “At first, it seemed kind of cheesy, but then I thought about it and realized that I don’t do that with myself very often. It’s kind of nice to focus on the positives.”

Students have the opportunity to return to the program for multiple years during high school and college. As an undergraduate at Boston University, Chim spent at least 12 hours a week in Avidor-Reiss’ lab. Now, he works as the program coordinator for Project Success, continuing the experience for students following in his footsteps. He plans to apply to graduate school next year and study what he calls “the science of life” — biology.